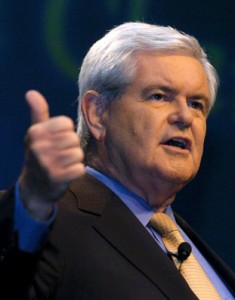 He was hoping to galvanize Six Sigma users to help him educate the public.

“This hasn’t been presented to the American public,” and until they recognize what Six Sigma policies can do, they won’t ask for it.

“Give a speech to your Rotary Club, write a letter to the editor, give a tour of a Six Sigma facility to elected officials,” he suggested.

Gingrich has been a follower of the Six Sigma management system for many years, having studied the system and taken courses from the originator, William Deming. Deming became famous for turning around Japan’s manufacturing industry after World War II and then bringing his system to the United States where large corporations soon adopted his principles. The “lean” in Lean Six Sigma comprises five principles to streamlining production.

Gingrich singled out the civil service and regulatory system as two examples of government waste. The civil service has a history of 130 years, and it is entrenched in the government, he added. “This is a fundamental change, and it won’t be easy to do.”

As Gingrich took calls from listeners, a general contractor from South Carolina talked about the amount of waste she sees in the multiple layers of management and asked what she could do to help.

Gingrich suggested that she write down the issues that she sees and send them to him. He is forming a committee to start looking at issues and begin to formulate a response.

“You don’t need to provide the answer to the problem. We start by looking at systems that will work rather than focusing on what is not,” he emphasized.

This idea is one, Gingrich said, that should become a part of the campaign. “I want all the candidates to be talking about it. I want Congress to talk about it. I want to lead this now, not wait until I get into office.”

(You may send your ideas about government change to Newt Gingrich at adam@newt.org. – Ed.)

N&V StaffOctober 7, 2022
Read More
Scroll for more
Tap
Big Gamers Take Crusade Against Dotty’s To The State
Open A Brothel – It’s Easier Than Opening A Mine