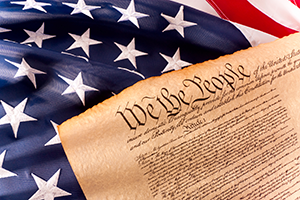 (Newt Gingrich) – From Athens and Rome to the present day, all great societies have founding myths — stories they tell themselves about who they are and where they came from. Perhaps because the United States is younger than most nations (239 years old on Saturday), our founding is among the best-documented. We’re fortunate to have thousands of pages of letters, speeches and other writings from our founders, recording their thoughts and debates as they played out. It’s a sign of how politically powerful and historically important the American founding was — and still is — that deeply rooted myths persist today. As we celebrate Independence Day, here are a few of the biggest myths about the Founding Fathers.

1. They wanted a secular nation.

According to the ACLU’s Web site, the Founding Fathers “knew the best way to protect religious liberty was to keep the government out of religion.” And according to About.com’s Austin Cline, Thomas Jefferson’s 1802 letter to the Danbury Baptists, describing “a wall of separation between Church & State,” was merely a “mild expression” of Jefferson’s — and other founders’ — desire to achieve freedom from religion, not just freedom of religion.

Jefferson asked: “Can the liberties of a nation be thought secure when we have removed their only firm basis, a conviction in the minds of the people that these liberties are the gift of God?” George Washington thought religion essential to curbing the influence of despots and providing a higher authority for the rule of law, proclaiming in his Farewell Address that “of all the dispositions and habits which lead to political prosperity, religion and morality are indispensable supports.” And Alexander Hamilton wrote, “The politician who loves liberty . . . knows that morality overthrown (and morality must fall with religion), the terrors of despotism can alone curb the impetuous passions of man.” Hardly the words of men seeking to drive faith from public life.

The modern notion that morality and religion can be disentangled from the republic would have been alien to our founders. They inscribed their belief in the opening lines of the Declaration of Independence, writing that “all men are created equal” and “endowed by their creator with certain unalienable rights,” appealing explicitly to God as the source of the document’s — and the new government’s — very legitimacy.

2. They unanimously supported the Revolutionary War.

We imagine our war for independence as a straight-ahead clash between patriot colonists and British soldiers. But the patriots themselves were British, and they were deeply divided about war with their mother country.

As late as July 1, 1776, John Dickinson, the Founding Father who had written the “Declaration of the Causes and Necessity of Taking Up Arms” with Jefferson the year before, was still arguing “against the Independence of these Colonies” in hopes of a possible reconciliation. It’s true that when the Continental Congress voted for independence on July 2, the vote was unanimous — 12 states in favor, none opposed. But then again, the entire New York delegation abstained because its members were unsure of the will of their constituents. (The state’s merchant class was especially ambivalent about the revolutionary cause.)

Even after the Declaration of Independence, writes historian Robert M. Calhoon , following an initial swell of support, no more than 45 percent of the population actively participated in the war effort. Historians estimate that a fifth of the colonial population openly opposed the patriots during the war.

Which explains why the fable about Paul Revere shouting “The British are coming!” on his midnight ride could never have happened. He was on a covert mission and couldn’t know who among the population was a patriot and who was a royalist. (And since the colonists thought of themselves as British at the time, the phrase would have baffled them.)

3. The founders were isolationists.

In a widely read 2007 Manchester Union-Leader op-ed, then-Rep. Ron Paul (R-Tex.), running for president, attempted to rebrand his isolationist foreign policy stance — a call for America to withdraw from its traditional role as a global power — by declaring that he advocated “the same foreign policy the Founding Fathers would.”

But the founders weren’t isolationists. Washington counseled that “it is our true policy to steer clear of permanent alliances with any portion of the foreign world” — a passage often cited by those looking to pull back America’s drawbridges. But he was responding particularly to the expiration of our 1778 treaty with France, not arguing that America should withdraw from world affairs. In fact, Washington and the Continental Congress had previously pleaded — through Benjamin Franklin, the American ambassador — for then-Bourbon France to intervene on behalf of the colonists during the Revolutionary War.

Jefferson’s entreaty, in his first inaugural address, to seek “peace, commerce, and honest friendship with all nations, entangling alliances with none” is another favorite of today’s isolationists. But it was he who launched the Barbary Wars to secure free maritime passage for commerce, one of America’s first military excursions abroad.

4. They were above partisanship.

In 2004, USA Today’s Chuck ­Raasch wrote, “So much for the vision of the founders,” lamenting the machinations of party politics on display during that year’s presidential race. This past week, ABC News’s Matthew Dowd invoked the founders while calling for “politics that puts country first and not party.” Who, after all, could argue with putting country first?

Indeed, John Adams and James Madison professed disdain for partisanship. Adams said parties were “the greatest political evil under our Constitution.” Madison warned in “The Federalist No. 10” that “so strong is this propensity of mankind to fall into mutual animosities, that where no substantial occasion presents itself, the most frivolous and fanciful distinctions have been sufficient to kindle their unfriendly passions and excite their most violent conflicts.”

But Madison wrote this as a leader of one distinct faction, the Federalists, who argued vociferously in favor of constitutional ratification while their anti-Federalist opponents, among them Patrick Henry, attacked their ideas in terms that were, for their day, far from polite. Madison later aligned himself with Jefferson and James Monroe in the opposition Democratic-Republican Party, moving away from Federalists Washington and Hamilton.

Madison was right about “violent conflicts,” though: Jefferson ally Aaron Burr so reviled Hamilton (their enmity was both personal and political) that Burr challenged Hamilton to, then killed him in, a duel. The founders might have ballyhooed partisanship — as our leaders do today — but they were just as guilty, if not more so, of partisan fighting.

5. They thought the Constitution would “evolve.”

“The provisions of the Constitution are not mathematical formulas,” Justice Oliver Wendell Holmes said. “. . . They are organic, living institutions.” His words prefigured Woodrow Wilson’s “living” constitutionalism — the notion that the Constitution evolves over time. Even Justice Anthony Kennedy, writing last month’s Supreme Court decision legalizing same-sex marriage, claimed that the founders “entrusted to future generations a charter protecting the right of all persons to enjoy liberty as we learn its meaning. When new insight reveals discord between the Constitution’s central protections and a received legal stricture, a claim to liberty must be addressed.”

But while there’s no question the framers believed that the Constitution could be changed — through the amendment process they carefully outlined — an evolving document wasn’t what they had in mind. “Our peculiar security,” Jefferson wrote in 1803, “is in possession of a written Constitution. Let us not make it a blank paper by construction.” Washington affirmed that the Constitution was unchanging “till changed by an explicit and authentic act of the whole people.”

“If in the opinion of the people,” he added, “the distribution or modification of the constitutional powers be in any particular wrong, let it be corrected by an amendment in the way which the Constitution designates. But let there be no change by usurpation; for though this in one instance may be the instrument of good, it is the customary weapon by which free governments are destroyed.”

This column was originally published in The Washington Post.