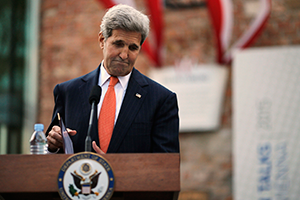 (Newt Gingrich) – Secretary of State John Kerry entered politics 45 years ago on a platform of opportunistic anti-Americanism and false peace with totalitarianism. Then as now mistaking dishonor for political heroism, Mr. Kerry lied to the American people to justify his preferred policy of weakness and surrender. And as he proved this week, he’s still at it, with Mr. Kerry the “peacemaker” in the leading role.

Mr. Kerry himself drew the Vietnam connection at the close of the negotiations in Vienna, when each of the officials had the chance to speak about “what this meant to them.” According to Undersecretary of State Wendy Sherman, Mr. Kerry told the room he saw the Iran deal as a part of the anti-war activism he has been engaged in since he was 22 — “that’s what this was all about.”

Is it any wonder, then, that a 1960s activist who told Congress, without evidence, that he had witnessed U.S. soldiers committing atrocities in Vietnam (and later conceded he hadn’t) now appears on Sunday shows as secretary of state to make utterly untrue claims about the administration’s surrender to Iran?

Indeed, almost every key point Secretary Kerry made in defense of the Iran deal on political talk shows this week was untrue.

Mr. Kerry claimed that Iran’s breakout time (the period required to have a full nuclear weapon) will “never go to zero.” But as Fox News Sunday pointed out, President Obama himself said in April that by the later years of the agreement, Iran’s breakout times “would have shrunk almost down to zero.” Mr. Kerry, apparently, is relying on some technicality to evade a fact even the president openly admits.

Mr. Kerry repeatedly claimed that “there is no country anywhere on this planet that has anywhere, anytime [inspections]. There is no such standard within arms control inspections,” as he put it on Fox News. “This is a term that, honestly, I never heard in the four years that we were negotiating,” he said on CBS. “It was not on the table.”

This is a shameless lie. “Anytime, anywhere” access has been a widely discussed component of the Iran negotiations. It is simply impossible to believe that Mr. Kerry has never heard the term. And in April of this year, a senior aide to the president on national security matters told Jake Tapper on CNN that “under this deal, you will have anywhere, anytime 24/7 access as it relates to the nuclear facilities that Iran has.” The secretary of energy (with whom Mr. Kerry made several appearances on Sunday) told Bloomberg in April that “we expect to have anywhere, anytime access.”

This is just the beginning of an outrageous parade of untruths and dishonesty from Mr. Kerry about what the Iran deal actually says, what the U.S. initially sought, what concessions the administration made, and what officials have said in the past about their negotiations.

But what of Mr. Kerry’s closing statement in Vienna that the Iran deal is a triumph for peace — that it was about making sure a war like Vietnam never happens again? Well, his negotiating partners obviously do not see the deal the same way.

As the Middle East Media Research Institute reported, Iran’s Supreme Leader Ali Khamenei reaffirmed in a television address last week that when Iran says “Death to America” and “Death to Israel,” it really does mean it.

“The slogans of the Iranian nation on Al-Qods Day show what its position is,” he said. “The slogans ‘Death to Israel’ and ‘Death to America’ have resounded throughout the country, and are not limited to Tehran and the other large cities. The entire country is under the umbrella of this great movement [of ‘Death to America’].”

It is beyond alarming that Mr. Kerry — or anyone else in the Obama administration — can fail to take at their word fanatics who openly seek nuclear weapons while chanting “Death to Israel” and “Death to America” on national television. The deal is no victory for peace. It’s a surrender to a violent and dangerous regime.

This column was originally published in Washinton Times.