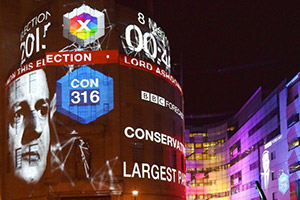 We get so distracted looking at polls and listening to so-called analysts that it’s easy to forget that the people ultimately decide the outcome, not the pollsters or the journalists.

We also forget when looking at polling snapshots that candidates and their campaigns can move people through persuasion, sometimes decisively.

The Conservative campaign in Great Britain had a decisive impact on the outcome.

Virtually all of the elite analysts and pollsters were projecting a “hung election” in which no party could get a majority. Some were saying the election would prove the need for electoral reform because there were now so many smaller parties taking away votes from the major players.

Others thought the United Kingdom Independence Party would take votes away from the Conservative Party and make it impossible for Prime Minister David Cameron to stay in office. (I confess I was worried about this possibility.)

None of these scenarios occurred.

Cameron and the Conservatives followed a smart strategy that holds a number of lessons for Americans.

I am fortunate in writing just one day after the election because my good friend and former spokesman Mike Shields (until recently the chief of staff to RNC Chairman Reince Priebus and now the head of the American Action Network) was in Britain for the last days of the campaign and had a number of useful insights which he gave me permission to share.

Shields believes that the greatest lesson of the Conservative upset–which shattered every pre-election poll and every analyst’s assumptions–may have been Prime Minister Cameron’s constant assertion that Conservatives are for “working people.” Shields notes that this phrase is a populist reaffirmation of policies focusing on normal working people rather than on the concerns of elites. But it is also a reminder that Conservatives are for people who want to work, not freeloaders. The strategy reflects a similar theme in the Maine Governor’s race last year, in which the Republican emphasis on helping workers and cutting off people who were cheating grew the party’s vote decisively.

As Shields put it, “The voters get it–many of them work and play by the rules, and they see other people gaming the system. So saying you are for ‘working people’ is a brilliant phrase.”

Second, as Shields asserted, “the Conservatives were very disciplined in focusing on the economy.” Britain had adopted significant spending cuts under Conservative leadership, already cutting the deficit by a third. They showed their sincerity by enacting across-the-board cuts, including cuts to programs normally protected by Conservatives such as law enforcement and military defense, while having the courage to cut politically difficult programs such as welfare, housing benefits and transportation.

Their case in the election was simple, Shields said: the cuts were finally taking effect, spurring economic growth and the best recovery in Europe. After all of the tough decisions on spending, Conservatives asked, why would Britain want to go back to the people who put them into debt and despair?

When their opponents charged that Conservative cuts to social programs would cause major hardship, the Tories were disciplined in reminding voters that more economic growth and more jobs lessen the need for those programs and produce more revenue to pay for them. That is a message any Reaganite would be proud of.

The Conservatives did promise to spend on a few programs that posed potential political problems–and they paid for these programs with cuts elsewhere. They survived the typical and predictable attack that they’d dismantle the National Health Service, Shields pointed out. Prime Minister Cameron’s personal story about taking his ill child to NHS allowed him to survive.

This combination of controlling government spending, focusing on the economy, and exercising judgment in boosting key programs (as I have advocated recently in calling for doubling the National Institutes of Health budget) could be the right formula for the GOP.

Next, Shields points out, Labor helped defeat itself by moving to the left. Prime Minister Tony Blair built a centrist Labor Party that won decisively. But as soon as he was out of office, Labor began moving back to the left. Ed Miliband, until today the Labor Party Leader, followed a DeBlasio-Warren model of arousing the base and emphasizing left-wing ideas. In fact, Miliband began getting caricatured in the media as “red Ed”.

Conservatives succeeded in defining Miliband as a threat to working Britons and the charge stuck. People simply concluded that Labor was too big of a threat to the economy and to their own pocketbooks.

The final nail in the Labor coffin was the emergence of the Scottish Nationalist Party which jumped from holding 6 seats to 56, leaving Labor with only 1 seat in Scotland. It is hard to see how Labor will ever compete if they remain locked out of what had been one of their strongholds.

A number of reporters wrote before the election that Republicans in the United States would have to draw lessons from the British vote about the need to moderate to appeal to a broader constituency. They asserted that the expected failure of the Conservatives to get a majority in Britain and the growing strength of the Labor Party proved politics was moving to the left and that redistribution would be a key issue in the 2016 American elections.

Now that the results have been the exact opposite of their projections, it will be interesting to see how many commentators adjust their analysis.

Republicans certainly do have a lot to learn from the 2015 British elections. But the press, the Democrats, and the liberals may have even more to learn.