Gingrich: On the Edge of a Virtual Skyscraper

Gingrich: On the Edge of a Virtual Skyscraper
N&V Staff 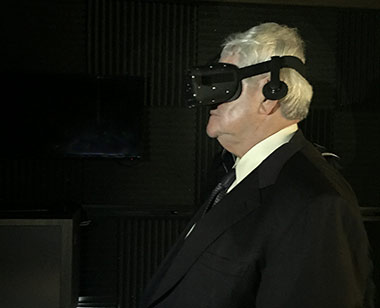 (Newt Gingrich) – Every so often a technology comes along that makes you realize as soon as you try it that it will change the world. Email and the web browser were two good examples. Cell phones were another. Last week at Facebook I had the thrill of experiencing one more: virtual reality.

That may sound ridiculous, but within a minute of putting on the Oculus Rift, Facebook’s virtual reality headset, you know that millions of people are going to spend hours with these devices strapped to their faces. It’s that amazing.

One second you’re in a submarine, completely immersed in the control room. You look up at the ceiling and it looks so close that you could reach up and touch it. You take a step toward the periscope in front of you. It gets a step closer.

The next thing you know, you’re inside a different scene entirely. In the distance, you see a T-Rex walking toward you. He comes to a stop a few feet in front of you, roaring in your face, so close you expect to feel his breath on your skin. You find yourself leaning back on your heels. Then he steps right over your head and continues on his way.

Next you’re at the top of a skyscraper, standing at the edge and looking down on a sprawling metropolis. With your toes at the edge of the mat you’re actually standing on in real life, your eyes really do fool you. The floor feels like a very precarious perch. You have to take a step back.

A few scenes later, you see a model of a cityscape sitting on a virtual tabletop. Bending down for a better look, you “zoom-in” quickly and are face-to-face looking at a single window of an individual building. Just by bending your waist, you can inspect the architecture of an entire city in three dimensions.

For a better idea of what all this looks like to someone not wearing the Oculus Rift, watch this video of Business Insider editor Henry Blodget trying it out for the first time.

It is hard to imagine how real all of this feels until you’ve actually experienced it. But even these demonstrations are only the beginning of the experiences it will likely be possible to create in virtual reality. There will be amazingly lifelike games. There will be feature-length motion pictures. And there will be experiences in between those two that we don’t even have words for today.

The implications for education and entertainment will be enormous. Imagine crossing the Delaware with George Washington on Christmas night of 1776. Imagine watching the debates of the Constitutional Convention as no one but the Founding Fathers did. Imagine being a member of the audience at Ford’s theater the night Abraham Lincoln was shot. Or imagine watching the State of the Union in real time from a seat in the center aisle of the House chamber–with your best friend from the other side of the country sitting beside you. This will revolutionize what we think of as television programming for everything from news to sports to drama.

Virtual reality is technology worth being very excited about. I’m grateful Facebook gave me the chance to try it. And as Oculus announced today, you’ll have the chance to try it, too, and sooner than you might think: the team will release the first consumer version of the Oculus Rift early next year. Until then, you’ll just have to experience it virtually in this newsletter.

N&V StaffJuly 6, 2022
Read More
Scroll for more
Tap
At the capital: SB411: School districts want another tax increase for construction
You can be Mayor or Black, but not both