Gingrich: The Code of a Happy Warrior

Gingrich: The Code of a Happy Warrior
N&V Staff 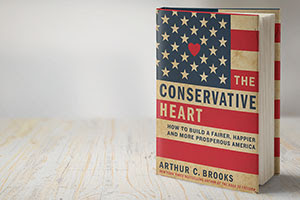 (Newt Gingrich) – Many Americans, and especially conservatives, have become pessimistic about America’s future over the past decade, enduring economic and political setbacks that have challenged our confidence. Yet we shouldn’t lose sight of the fact that as conservatives, our position is inherently optimistic: we’re the people who believe our system of limited government and free enterprise is the greatest force for good in the history of the world.

That’s the argument that my friend Arthur Brooks, president of the American Enterprise Institute, reminds us we must make over and over again—and cheerfully. Brooks is endlessly confident that America will remain the world’s freest and strongest nation not just because we can, but because we know we must. Deep down, Americans believe in our moral duty to remain that shining city upon the hill, lighting the path toward “life, liberty and the pursuit of happiness” for the world to see.

Brooks’s latest book, The Conservative Heart: How to Build a Fairer, Happier, and More Prosperous America, emphasizes that last part of the Declaration’s famous line– “the pursuit of happiness.” For Brooks, happiness is something more than simple pleasure. It is a complex view of the good life—something to be pursued vigorously as well as generously shared. And it’s not always easy: happiness requires hard work, love and gratitude.

As Brooks eloquently demonstrates, the conservative ideas inherent in the free enterprise system have done miracles around the world – lifting more than billion people out of abject poverty in the last 25 years alone. According to Brooks, that story is barely known here at home because conservatives seem to regard it as a “state secret” that their values and ideals have benefited people the world over.

Brooks wants to bring that story and those policies to the forefront of our politics with moral urgency. If poverty is frustratingly high, incomes are stagnating, and the opportunity to rise seems to have diminished from earlier generations of Americans, conservatives must speak directly about compassion and fairness—values the Left imagines it protects but which in fact it undermines. Conservative ideas, he reminds us, are compassionate and fair. They allow people to live fuller, better lives. That’s the moral case for conservatism.

Some conservatives reading The Conservative Heart may be tempted to regard the language of fairness and compassion as code for abandoning our values for softer, mushier centrism. Brooks, however, makes clear that it is not the case. “This absolutely does not mean,” he writes, “that we must shift leftward or soften our convictions. To the contrary, we must show the American people a new vision of compassion and fairness that is written on the conservative heart.”

What Brooks is telling conservatives is simple: your ideas and your values are not wrong and they don’t need to be unpopular–but they are often poorly presented. Debt, deficits, taxes, and regulations are remote, academic arguments for Americans who are struggling to get by. He reminds us that these debates matter most not as issues in themselves but for what they mean for our ability to live a good life—for our opportunity to pursue happiness. Too often, we tell the story backwards – reverting to technical debate talking points when people need a moral explanation for the idea or policy. We need to speak from our hearts and aim for theirs.

Brooks puts it succinctly: “Conservatives are in possession of the best solution to the problems of poverty and economic mobility. Yet, because we don’t speak in way that reflects our hearts, many Americans simply don’t trust us and are unwilling to give us the chance to implement those solutions. They know instinctively that outmoded redistributionist arguments generally yield lousy results, but they feel they have no palatable alternative.”

The Conservative Heart is a compelling case, and an entertaining read, too, since Brooks can quote the Dalai Lama, Dale Carnegie, and Milton Friedman with ease. His sincere sense of conviction comes through on every page.

More importantly, Brooks lays out a strong case for renewing the “Happy Warrior” ethos – one that built America into the shining city upon a hill — Fight hard, fight long, but no matter the outcome, never surrender to pessimism or despair, and never lose sight of the fundamentally moral purpose of the cause.