Gingrich: The Collapse of the Democratic Party

Gingrich: The Collapse of the Democratic Party
N&V Staff 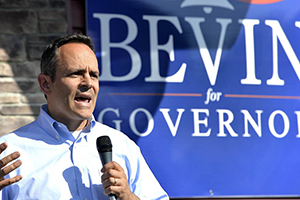 (Newt Gingrich) – At least since the election of President Obama in 2008, Republicans have been hearing that their party is on the verge of extinction. The only thing the media pundits haven’t seemed able to agree on is what will be the cause of death.

Some of the eulogies have claimed that the Republican Party is dying of old age, “literally.”

Other commentators predicted endlessly that the GOP is doomed because it supposedly cannot appeal to hispanic Americans and other minorities.

Still others smeared Republicans as anti-women and claimed ridiculously that the party has destroyed its chances with the sex that makes up half the population.

Most pundits seemed to agree that younger voters–“millennials”–would never support Republicans because of their supposedly prehistoric views about things like the Constitution and the rule of law.

Jonathan Chait summed up the left-wing establishment’s view of Republicans’ inevitable demise when he wrote in 2012–in a long feature piece for New York Magazine–that “the modern GOP—the party of Nixon, Reagan, and both Bushes—is staring down its own demographic extinction… [C]onservative America will soon come to be dominated, in a semi-permanent fashion, by an ascendant Democratic coalition hostile to its outlook and interests.”

What a disappointment all of these commentators were in for! Since President Obama’s election in 2008, the Republican Party steadily gained strength. By almost every metric, the party is at historic high-water marks. In the House, Republicans have the largest majority since 1928. They have a majority in the Senate. They have 32 governorships. They have the greatest number of state legislators and greatest number of state legislative bodies in their history.

The results of this week’s elections further grew the Republican Party’s historic strength.

In Kentucky, Matt Bevin won the governorship in an upset that makes him the state’s second Republican chief executive in four decades. He did it by running against Obamacare and national Democrats. Kentucky also elected Republican Jenean Hampton to the lieutenant governorship. She will be the first African American elected statewide in Kentucky’s history.

In Virginia, Republicans held the state Senate despite an outside group funded by New York mayor Michael Bloomberg spending millions of dollars to turn the chamber to Democrat control.

In Houston, Texas, voters defeated the left-wing mayor’s attempt to let biological males use women’s restrooms, and vice versa. The measure went down with 61 percent of voters opposing the bathroom ordinance–a significant blow to the left in a city that is by no means conservative.

In addition, Republicans won a number of other state legislative and statewide elections to continue to build on the trend of winning in areas previously won by President Obama.

Finally, after this week’s elections, the Washington-media establishment may be starting to show signs of recognition that, far from 2010 and 2014 being anomalies on the way to Republican extinction, it is the Democrats who are facing historic challenges in their nationwide appeal.

Chuck Todd, moderator of NBC’s Meet the Press, noted on Twitter this week that “outside of Obama’s campaigns in 2008 and 2012, the Dem track record everywhere else is, well, abysmal since his election.”

In fact it may turn out to be President Obama’s two campaigns that were the anomaly: extraordinarily well-run, with an exceptional candidate in favorable political environment. Everywhere else, as Todd points out, has been disastrous for Democrats.

You have to wonder: if in 2016 Republicans win the presidency, hold the Senate, keep the House and maintain their historic strength at the state level, will the same pundits in the news media be calling on the Democrats to compromise their core principles and change their views, as so many were eager for Republicans to do following President Obama’s reelection? I’m not holding my breath.

Troy La ManaAugust 13, 2022
Read More
Scroll for more
Tap
The Blaze: ‘Don’t Lie!’: An infuriated Ben Carson blows up at media during news conference over Scholarship story
NPRI: So who are the families applying for Education Savings Accounts?