(Newt Gingrich) – Wednesday night’s presidential debate on CNBC may go down in history as a major turning point in candidate-news media relations.

For years, the elite news media has assumed it was in charge — that it could define the topics, lengths of answers, and who got to speak. 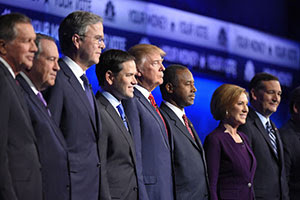 For me, the brutal dishonesty and anti-conservative bias became unbearable when Chris Matthews “moderated” the Republican debate at the Reagan Library on May 3, 2007. This was the very first debate of that cycle and there was Tip O’Neill’s press secretary, a hard-line left-wing partisan Democrat pretending to “moderate”. A few months later, Matthews would say that he “felt this thrill going up [his] leg” as he listened to Senator Obama speak. And he had the gall to show up at the Reagan Library as a “journalist.”

By the 2012 campaign, Republican candidates and Republican audiences had begun to recognize the bias, hostility, and in some cases open contempt the so-called moderators had for Republican values, ideas and personalities. In more than 20 debates, the most emotional audience responses came when candidates stood up to media bias and attempted bullying.

The elite media has not yet caught on that an increasingly anti-elite, conservative audience rewards candidates for fighting back against the liberal media. Frank Luntz reported Wednesday night that he had never seen as strong a response as Ted Cruz got for blasting the CNBC team. That is an indication of the incentives Republicans now have for standing up to liberal journalists.

The miraculous part of Wednesday’s debate came in two stages. First, the CNBC team was amazingly, consistently biased, arrogant and even contemptuous, to such a degree that virtually everyone understood that this was not a debate but a battle between two sides.

Second, at some point the Republican candidates rallied in mutual defense, forming a united team by praising each other and attacking their real adversaries, the CNBC opposition.

At times I felt I was watching the scenes in Gladiator where Russell Crowe teaches his group to fight as a team. After the battle (it was not a debate), candidate after candidate went on television to speak positively about his or her fellow candidates. When Donald Trump is speaking fondly of his fellow Republican candidates, you know something has changed profoundly.

Chris Christie may have set the right tone for future debates when he ridiculed the question about regulating fantasy football. In one sweeping statement, he exposed the infantilism and trivia which pass for much of modern journalism. It would be a real turning point if future moderators met the Christie Standard for seriousness.

Republican National Committee Chairman Reince Priebus made clear how bad the CNBC performance was in a statement issued immediately after the debate. Priebus tweeted: “In spite of the moderators, I’m proud of our team for standing up against the improper and unprofessional display put on by CNBC. CNBC should be ashamed of how this debate was handled.”

This outcome came despite Priebus’ best efforts. He had worked exhaustively for more than a year to put on a fair and responsible series of debates. The RNC cannot literally tell journalists what to ask. But Priebus did tell NBC they could not use left-wing MSNBC to host a Republican debate.

He insisted that they had to use their business channel. He went on to insist that the theme of the debate had to be about the economy and spending. He went a step further and insisted that Rick Santelli, whose rants had launched the Tea Party movement, be one of the questioners.

Despite all that effort, the liberal culture of NBC asserted itself nonetheless and CNBC returned to the very gotcha games the RNC had fought to oppose.

Priebus responded to this broken commitment by promising that he will “fight to ensure future debates allow for a more robust exchange.”

Ted Cruz on Hannity may have offered the right principle for future debates: simply ensure that the moderators have voted in a Republican Primary. If the Cruz Proposal gets adopted Wednesday night will really have been a miraculous debate.

The column was originally published at the Washington Times.