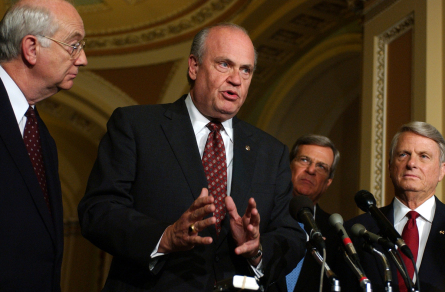 (Kyle Trygstad, Roll Call) – Fred Thompson, a former Republican senator, presidential candidate and actor, died Sunday in Nashville, Tenn., from a recurrence of lymphoma, according to a statement from his family. He was 73.

Six years out of law school at Vanderbilt University and a year after serving as campaign manager for Sen. Howard Baker, R-Tenn., Thompson first gained national notice after signing on in 1973 as the Republican counsel to the Senate Select Committee on Presidential Campaign Activities, which investigated President Richard M. Nixon and the Watergate scandal.

He would go on to work in the governor’s office of now-Sen. Lamar Alexander, R-Tenn., before serving as counsel to a pair of Senate committees.

“Very few people can light up the room the way Fred Thompson did,” Alexander said in a statement. “He used his magic as a lawyer, actor, Watergate counsel, and United States senator to become one of our country’s most principled and effective public servants. He was my friend for nearly fifty years. I will miss him greatly.”

Thompson was elected in 1994 in a special election to fill the remaining two years of Vice President Al Gore’s Senate term. He was elected to a full term in 1996, then opted to return to acting rather than seek re-election in 2002.