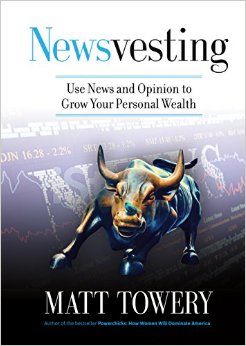 (Newt Gingrich) – Newsvesting is a term you are going to hear a lot about.

It is the title of a new book by Matt Towery, but more importantly it is a new concept Towery has developed which he explains with enthusiasm and clarity.

Newsvesting is exactly what it sounds like. It is a combination of news analysis and investing.

Towery developed Newsvesting after studying Warren Buffett’s habit of constantly reading the news and analyzing information that is available to anyone who is interested.

I have to confess that I approached this book with a personal bias. Matt Towery coached my older daughter about debate when she was in high school and he was in college. That was more than 40 years ago.

Matt was a colleague in growing the Georgia Republican Party. We worked together to help elect Mack Mattingly the first Republican U.S. senator from Georgia in 1980. Matt became a successful attorney with a fascination for politics and government. He went on to win a state legislative seat and then became a force in the state legislature.

In 1992, when I was redistricted into a new district in an effort to defeat me, Matt chaired my campaign and helped me survive despite the best efforts of the old Democratic machine.

He became a very successful pollster with his own firm, Insider Advantage. He became an expert on politics in the Southeast and founded several state-focused magazines. He is also a bestselling author.

With that many different activities and achievements, you can imagine my surprise when he called to say he had written a bold new book on investing based on studying the news. He called it Newsvesting.

I agreed to read it out of friendship. I found myself fascinated because it is in fact very interesting and thought-provoking.

Matt has developed a knack for noticing the news that matters and then thinking deeply about its implications.

Like Warren Buffett, he isn’t trying to run from shallow event to shallow event. He is looking for the deep, long waves that signal real opportunities or hazards about a sector or a company.

The analysis that absolutely convinced me was the depth of his thinking about the impact of the budget sequester on military procurement.

On the surface, Towery reasoned, a cap on military spending (and in some cases a cut) would mean less business for the manufacturers of military equipment. But Matt urged the reader to think more deeply about the pattern of modern military procurement.

What if, for instance, a decline in American defense spending frightened our allies and made them feel compelled to invest even more in their own defense because they could not rely on the U.S. as much as they previously had?

What if the military manufacturers increased their efforts for overseas sales to offset the decline in American procurement?

Towery notes in Newsvesting that Raytheon is selling Patriot missiles to 14 countries. Their combined new orders more than makeup for any American shortfall.

Thus, in a Newsvesting analysis, you have to consider military manufacturers as global and not just national companies. From an American perspective, they might look troubled. From a worldwide perspective, they seem to be in significant demand as the world has become more chaotic and dangerous.

Matt lays out a series of practical rules and helpful insights for any serious investor.

Newsvesting isn’t a gimmick. It isn’t magic. It still takes time, real thought and a willingness to learn.

It is, however, a very useful introduction to a new way to read the news and apply it to your investment decisions.

It is well worth reading Newsvesting and studying it.

Mr. Gingrich is a former Republican Speaker  of the United States House of Representatives.