GOP has nobody but themselves to blame for nuclear Iran 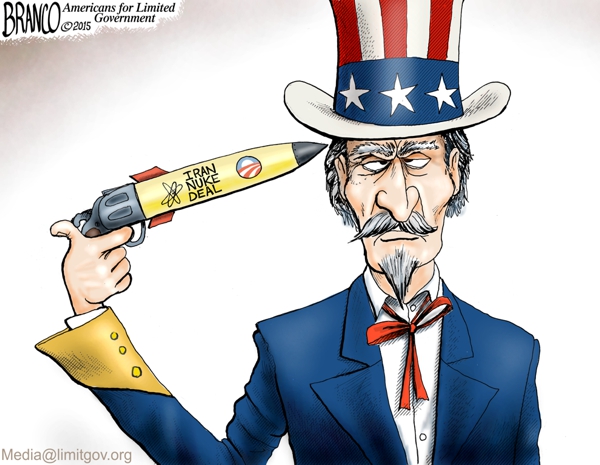 (Robert Romano for NetRightDaily.com) – “[I]f in fact it’s as bad a deal as I think it is at this moment, we’ll do everything we can to stop it.”

That was House Speaker John Boehner (R-Ohio), blasting a deal reached by the Obama administration with Iran that critics say will enable the regime there to acquire nuclear weapons.

There’s only one problem.

Both the House and Senate just passed legislation in April — H.R. 1191, the so-called Iran Nuclear Agreement Review Act of 2015 by Sen. Bob Corker (R-Tenn.) — that will make it virtually impossible to stop the deal now. How?

The legislation requires a resolution of disapproval pass Congress and be signed by President Barack Obama in order to prevent economic sanctions from being lifted.

Obama has already promised to veto such legislation and 150 House Democrats in May signaled they will be voting to sustain such a veto.

Meaning that by passing the legislation, said Americans for Limited Government (ALG) President Rick Manning in a statement, Congress “turned the normal treaty ratification process on its head by requiring a veto override of two-thirds votes in both houses in order to stop the deal rather than the constitutionally required two-thirds majority in the Senate for ratification.”

And every member of Congress who voted for the Corker legislation knew it.

The bill came just a short month after 47 Senate Republicans led by Sen. Tom Cotton (R-Ark.) wrote a letter to the mullahs in Tehran that it is the Senate, not the president, who approves treaties.

Rather than defend that position, and require that Obama submit any nuclear treaty with Iran to the Senate for ratification, Congressional Republicans capitulated and ceded the Senate’s Article II, Section 2 treaty ratification power.

Said ALG’s Manning, “The world is less safe, and if Congress fails to defeat this deal, they will have nobody but themselves to blame. After all, with the Corker bill, they ignored warnings from Senator Tom Cotton and effectively made disapproving the deal a near impossibility.”

Members will hem and haw and say that Obama was going to do the deal anyway, and that this was the only way to have a vote on the issue, but that is simply wrong.

Upon release of the agreement, the Senate could have then proactively taken up the treaty and, if necessary, defeated it under the rules for considering a treaty.

Here’s the thing. They still can. Just ignore the Corker bill and do the right thing. Take up the treaty in the Senate, and defeat it. Forget the resolution of disapproval procedure under H.R. 1191. It’s unconstitutional for the House to have any say in a treaty anyway or to alter the constitutional requirements for ratifying one. If the parliamentarian complains, fire him.

A compelling argument can be made that Obama has already broken the deal he made with Congress. As Speaker Boehner noted in his statement, “[A]t the outset of the Iran negotiations, the Obama administration said that a good deal would affirm that Iran does not have the right to enrich. They also said that keeping sanctions in place until Iran met concrete, verifiable standards. And, they believed that they had to stop Iran’s drive for a nuclear bomb. Listen, the president has abandoned all of those goals, and that’s why the deal that we have out there, in my view, from what I know of it thus far, is unacceptable.”

Boehner added, “It’s going to hand a dangerous regime billions of dollars in sanctions relief while paving the way for a nuclear Iran.”

If it’s that bad, then why proceed with a dubious process that was initiated in bad faith? The Corker bill does not trump Article II of the Constitution. Just go back to Plan A. This is too important.

Israel has condemned the deal, with Prime Minister Benjamin Netanyahu saying, “Iran is going to receive a sure path to nuclear weapons.”

Netanyahu added, “Many of the restrictions that were supposed to prevent it from getting there will be lifted. Iran will get a jackpot, a cash bonanza of hundreds of billions of dollars, which will enable it to continue to pursue its aggression and terror in the region and in the world. This is a bad mistake of historic proportions.”

Saudi diplomats have already told the Washington Post that the deal green-lights initiating their own nuclear program. Mind you, the Saudis are not talking about competing for cheaper electricity with nuclear power. They’re talking about building their own nuclear weapons — the fresh start of a nuclear arms race in the Middle East — to defend themselves against their biggest enemy, Iran.

What does it say when our top allies in the region — Israel and Saudi Arabia — think this deal poses an existential threat to them?

As Manning warned, “The Obama Iranian deal makes proliferation in the region inevitable and, as a result, war more likely, not less.”

Meaning, it is up to members of Congress to stop it — before it is too late.

Otherwise, when Tel Aviv is a nuclear crater, they will have nobody but themselves to blame.