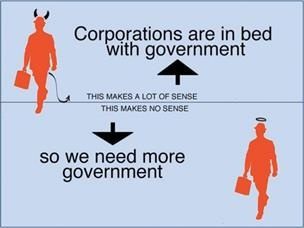 (Seton Motley) – The big government cronyism racket – is absurd. It is a disjointed, discombobulated mess of ridiculous ideas and assertions – put forward in steadfast defiance of the fundamentals of the free market and human nature.

Government intervention in the private sector is nigh always stupid and anti-productive. Private companies usually don’t go begging for government assistance – unless and until they have proven themselves failures in the private sector. (Unless they’re intensely obnoxious, have succeeded on their own – and want the added edge of government favoritism anyway. See: Google and Apple, amongst so many others.)

Most of the time, government isn’t picking winners and losers – government is picking losers at the expense of winners.

Big government officials – are more than happy to be the cronies on the inside. More government activity – means more power for them. Just cut the requisite campaign checks – and the government is your oyster. Oh – and then hire them to some well-paid-work-free gigs after they quit the government. Four-hundred-thousand-dollar-speech-giving, for instance.

Meanwhile in the Real World, there has of course been a technology revolution. Which has been a bit of a traditional-business-disruptor – and has unleashed a whole new tidal wave of attempted cronyism. As traditional businesses – disrupted by the new competition on the new playing fields – run to government to get (even more) protection from their increasing free market frailties.

For instance, brick-and-mortar retailers like Walmart and Target – look for government cronyism to protect them from the Internet advances of the likes of Amazon.

And no product is too small – to not have someone somewhere looking for big government cronyism to save their dwindling market share. Down to and including – eyeglasses and contact lenses.

Prior to 2003, the federal government gave great power and control over you, your eye exam and your prescription – to your optometrist. Your eye doc didn’t even have to give you a physical copy of your prescription – which made it exceedingly difficult to then go shopping elsewhere for lenses. But wait – the optometrists conveniently sell them…at exceedingly inflated rates. How’s that for inside-job crony protectionism?

This is just how the American Optometrist Association (AOA) and Johnson & Johnson like it. Massive profits – wrapped up tightly and neatly with a government crony bow.

But in 2003, Congress passed a law loosening the eye docs’ hold over you. They had to actually, you know, give you your prescription – so you could, you know, not pay captive lens prices. That – combined with the ongoing technology-aided ocular revolution – has been a free market boon.

Born were a raft of brick-and-mortar and online lens purveyors – hawking ever-more-discounted products. God bless competition. And now you can download smart phone apps – that give you a full-on eye exam, for a tiny fraction of the optometrist price. After which you can go online – and shop a global panoply of lens selections.

From start-to-lens-finish – without ever leaving the house, for a tiny fraction of the optometrist price. Cutting the AOA and Johnson & Johnson – entirely out of the now-cronyism-free equation.

But when the going gets tough – the crony-weak go running back to government for additional anti-free-market assistance.

These two crony titans are lobbying hard for additional protectionism – in Washington, D.C. and in statehouses all across the country. They are looking, for instance, to outlaw the eye exam apps. How’s that for anti-science?

These Big Cronies claim they are looking to outlaw technology – in the health interest of we humans. We still, they say, absolutely must have our hands held by their eye docs.

Except, of course, they’re selling their lenses in vending machines. And I have yet to ever see a medical professional – standing alongside any vending machine anywhere.

Here’s hoping elected officials everywhere – see the scam for what it is. And do nothing to further it.

Seton Motley is the founder and president of Less Government. Please feel free to follow him on Twitter (@SetonMotley) and Facebook. It’s his kind of stalking. This column was originally published on June 1, 2017 by RedState.