(Thomas Mitchell) – The next time you top off your tank please make note of the fact that more than 50 cents from every gallon is being siphoned off in the form of state and federal taxes. Then bow toward Carson City and tip your cowboy hat to the geniuses there who are shelling out untold amounts of your money to build recharging stations for electric cars, which pay no gasoline taxes. 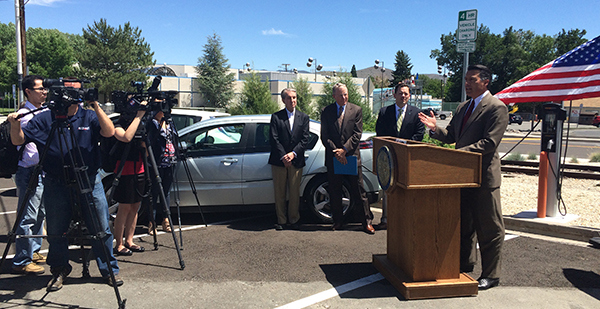 A couple of weeks ago Gov. Brian Sandoval made a big ceremonial announcement of his plan to build what his public relations flacks call the Nevada Electric Highway — the route between Las Vegas and Reno.

You see it is 450 miles from Las Vegas to Reno, but most electric vehicles have a range of less than 100 miles before needing to be recharged.

So the Governor’s Office of Energy is chipping in your tax money and NV Energy is chipping in your rate money to build recharging stations along U.S. 95 in communities such as Fallon, Hawthorne, Tonopah and Indian Springs. Each station would cost up to $30,000, according to press accounts. No one bothered to report the total cost of this largesse for the estimated 1,400 electric vehicles currently registered in Nevada.

The recharges would be free and save each electric car owner up to $1,300 a year, a power company official estimated — a comforting thought as the readout on the gas pump passes $50.

Each recharging station would have one direct-current rapid charge outlet that reportedly can recharge in an hour or so and two “level 2” chargers that take “several hours.” No one bothered to narrow that timeframe down to something more specific.

The state is in the process of soliciting applications from businesses and government entities to serve as recharging outposts. Each must be available 24 hours a day.

No one is speculating as to how many people would be willing to add at least three hours onto an otherwise seven and half-hour road trip — assuming the rapid chargers are available at every station and they are precisely spaced. By the way, the range of electric cars is reduced in extreme heat and extreme cold, of which Nevada has both.

A press release from the governor’s office quoted Sandoval as saying efforts to support electric vehicle use will benefit both the Nevada environment and the Nevada economy. This is the same governor who pushed for $1.3 billion in tax breaks for a Tesla electric car battery plant near Sparks while raising taxes on everybody else.

“This Electric Highway will allow electric vehicle drivers to power their cars by tapping into Nevada’s own renewable energy resources,” Sandoval said. “This will strengthen our state’s energy independence while reducing Nevada’s petroleum imports.”

Pay no attention to the fact renewable energy costs three or four times as much to produce as power from a natural gas-fired generator.

NV Energy President and CEO Paul Caudill was also quoted as saying, “We are delighted to partner with the Governor’s Office of Energy and local businesses to connect Las Vegas and Reno for our current and future electric vehicle customers and tourists.”

Delighted to spend other people’s money on toys for the wealthy?

The press conference announcing the Nevada Electric Highway was conducted in the parking lot of the Carson City Community Center. The city installed two recharging stations there and city officials confirmed that about 10 cars a week use the free service. The state already has 150 recharging stations, mostly at government sites and mostly in the urban areas where commutes are shorter.

These freebies are simply more sops to the electric car owners who already get a $7,500 federal tax credit when they purchase their electric toys.

“We’ve all driven this road before and have anxiety with getting gas,” said Sandoval, eliciting chuckles, according to a Reno newspaper account of the announcement. “Now we can have confidence to charge our electric vehicles and drive them from place to place.”

After spending money on north-south U.S. 95 the governor hopes to dot recharging stations along the east-west Highway 50, proudly dubbed the loneliest road in America, where, yes, governor, it is difficult enough to find gasoline as the gauge dips and the barren horizon looms.

N&V StaffOctober 4, 2022
Read More
Scroll for more
Tap
“Rejoice Republicans!” and “A Drought of Intelligence”
Walker readies himself as the candidate of the mainstream Conservative Movement