Harry Reid Better Hope God is in A Good Mood

So Harry Reid of all possible people in the United States of America says that Donald Trump—that’s President Trump to a jerk like Harry—“…is amoral. I don’t think he has a conscience.” 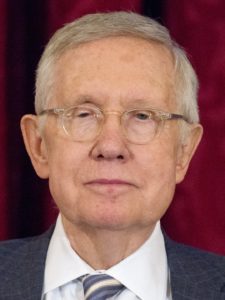 The man who called President George W. Bush a “loser” to a class of fourth graders?

The man who killed off two power plants in the town of Ely, Nevada for political reasons costing the town something like 1,200 jobs? (Full disclosure: the company of which I am CEO owns KELY in Ely.)

The Senator who back in 2006  was in hot water for violating Senate rules by concealing a seven-figure payoff on a suspicious land deal orchestrated by a longtime friend known for political bribery and mob ties? The senator secretly collected a $1.1 million profit on land he hadn’t personally owned for years.

The Senator who, in 2012 was embroiled in an influence-peddling scandal involving a Chinese “green energy” client of a Nevada law firm run by his son Rory? Harry was one of the Nevada projects’ most prominent advocates, helping recruit the company during a 2011 trip to China and applying his political muscle on its behalf. Reid’s son was an attorney at the Las Vegas firm that represented the Chinese Company, ENN Energy Group, and helped it locate a 9,000-acre desert site for well below its appraised value from Clark County.

The Senator who abused his authority to pressure the Department of Homeland Security (DHS) to expedite a $115 million foreign investor visa deal critical to his son’s casino client?  Reid got the DHS to override agency procedures to rush through hundreds of visa applications from foreign nationals who helped fund a Las Vegas hotel and casino that hired Rory Reid to provide legal representation for the project.  The illicit scheme possibly served as the straw that broke the camel’s back. A few days after a news report appeared Reid said he wouldn’t run for a sixth term in the Senate.

Today, the SLS (formerly the Sahara) is embroiled in a lawsuit filed more than a year ago by those very Chinese investors.

From the Los Angeles Times: “Sixty Chinese investors who were promised U.S. permanent resident cards for investing in the SLS Las Vegas hotel and casino have sued the developers of the project, saying they never received the promised green cards. The lawsuit, filed in Los Angeles County Superior Court, claims the investors put in $545,000 each but were the victims of a conspiracy to use their money on a project that opened in 2014 but has yet to be profitable.”

He’s talking about a President who actually earned his wealth.  Donald Trump ran for public office AFTER he became wealthy in the private sector as opposed to Reid who never held an actual job where he wasn’t sucking on the public teat.  He’s talking about a President who represents somebody Reid has no clue about—actual people as opposed to the political humps Reid is fond of hanging out with.

He actually said the other day that President Trump was the worst President ever. “He’ll lie. He’ll cheat. You can’t reason with him.”

Of course he also said about President Obama he could be successful because he had a “light-skinned” appearance and speaking patterns “with no Negro dialect, unless he wanted to have one”.

Seriously?  Do you think that anything this reprobate says is worth listening to?

I’m actually more offended by his comments about Obama than Trump.  Reid is and always has been a full-on racist who saw Obama as a tool for his (Reid’s) further looting of both the Federal and his constituents’ treasury.  It’s not like he ever served the good citizens of the great state of Nevada without a profit motive.

I don’t agree with just about everything Obama stood for, but he, too, occupied an office which every citizen of this great nation should have respect for; and minimizing Obama is minimizing every other occupant of that office.  We don’t do that in this country, writ large.

I have a friend whose skills are transferable in any party’s administration.  He once told me that were he called to help Obama, he wouldn’t.  I told him that this is the United States of America and when the President asks for your help—whoever he is—there’s only one answer. “Yes sir.”  He later thought about it and agreed.

Harry Reid is reportedly suffering from Pancreatic Cancer from which there is no reprieve. He can only hope that when he meets his maker, he asks for forgiveness in the right tone.  Eternity is a very long time.