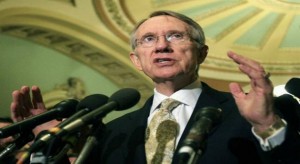 (Thomas Mitchell/(4TH ST8) Harry Reid wants Nevada to be powered by “green” energy, even if it costs the last dime of your money to pay his political contributors before they all go broke.

During an interview on Nevada Newsmakers Tuesday, Sen. Reid criticized NV Energy for not purchasing even more “green” energy than they already do:

“I don’t think NV Energy has done enough to allow renewable energy to thrive. I think a lot of the things they blame, not having the purchase-power agreements, has been based on what they say the Public Utilities Commission won’t do. It is simply not true. I have spoken to commissioners myself, and I think that if NV Energy wanted to do more with renewable energy, they could.”

When host Sam Shad said renewable energy is more expensive, especially solar energy, Reid said that simply was not true, and argued that Nevada has no oil and needs to produce power with geothermal, wind and solar. Perhaps he’s not heard of the Chainman Shale Formation or interstate commerce. Perhaps he’s not read that renewable energy is two, three or even four times more expensive than power obtained from natural gas-fired turbines.

Nevada lawmakers have passed a law requiring NV Energy to acquire 25 percent of its power from renewables by 2025.

But surely Harry knows those “green” energy companies are huge contributors to him and the Democratic Party.

Coincidentally on the same day Reid was slamming NV Energy, the Review-Journal reported online — never made print so far as I tell — that the litigation attempting to block a wind turbine operation in White Pine County had been settled, clearing the way for the wind to start operations in July.

The $225 million Spring Valley Wind, west of Great Basin National Park, is owned by Pattern Energy and will use 66 turbines to generate 150 megawatts of electricity. The company has a 20-year contract with NV Energy at the rate of 9.8 cents per kilowatt-hour, more than double the cost of natural gas.

Pattern Energy’s CEO is Mike Garland, who is a backer of WindPAC, which has contributed $15,000 to Reid over the past few years.

Today First Solar, which built a 50-megawatt solar panel farm in Ivanpah Valley, is firing 30 percent of its employees, 2,000 workers, and reducing production of solar panels. A couple of weeks ago, First Solar sold that Ivanpah solar farm to a Canadian oil company.

First Solar has received $3 billion in loan guarantees from the U.S. government to support its various projects.

First Solar’s former CEO, Robert Gillette, was a big contributor to Honeywell PAC, which gave $5,000 to Harry Reid’s campaign in 2009 alone and nearly $10,000 in prior years. That PAC gave more than $20,000 to Harry’s Searchlight Leadership Fund. It also gave thousands to the Senate Majority Fund, while Harry was the majority leader.

Gillette was replaced by company Chairman Michael Ahearn, who, along with his wife, has given $123,000 to various Democratic candidates in recent years. He also gave a few thousand to the Solar Energy Industry Association PAC, which gave generously to, you guessed it, Harry Reid. There were also a few donations for the Senate campaign of one Ken Salazar, now Interior Secretary and big backer of “green” energy.

The Center for American Freedom has a listing of other Reid “green” contributors, most of which have received generous tax breaks, grants and loan guarantees from the government.