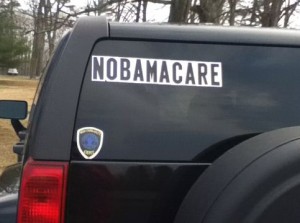 (Dr. Joe Heck) – Since the day it was signed into law, the public’s attitude towards ObamaCare can be summed up in one word: uncertainty. From the Supreme Court’s ruling on the law’s constitutionality and the special waivers granted to unions to recent polling showing that four in ten Americans don’t know it is the law, the effort on national health care reform has left the public rightly concerned.

Added to this atmosphere of uncertainty are the concerns I have repeatedly heard from the business community about how the law will affect Nevada’s economy. The law’s “employer mandate” provision, which requires employers with more than 50 employees to offer health insurance, could prevent businesses from expanding, decrease work hours, and result in lost jobs. With one of the highest unemployment rates in the nation, this could prove disastrous for Nevada workers.

The Obama Administration has finally started listening to the business community and announced earlier this month that the employer mandate would be delayed for one year due to uncertainty over enforcement and implementation. But since the President does not have the authority to unilaterally choose when laws go into effect, the House recently passed H.R. 2667, the Authority for Mandate Delay Act, to delay this key portion of the law.

However, the delay of the employer mandate begs the question, what about the individual mandate? During campaign season, all we heard from the President and his surrogates was the allegation that it is Republicans who only care about “big business” while Democrats care more about the middle class. Why then would the President only choose to delay a portion of the law that will adversely affect businesses? The answer is simple; the administration would rather protect big business while ignoring struggling middle class families and individuals.

Families and individuals are just as worried about the law as business owners. They are concerned the law may make it difficult for them to adequately provide for their families due to rising health care costs and insurance premiums. With that in mind, the House passed H.R. 2668, the Fairness for American Families Act, which delays the individual mandate for one year. I supported this delay because I have always believed that we should create incentives for people to purchase insurance, rather than punish them for not complying with a government mandate.

We have the best health care system in the world and that system is working for most people. The health care reform law with its mandates, fines, and taxes is the wrong approach if the goal is to extend access to care to those currently outside of the system. Hopefully the House’s actions on the employer and individual mandate will help facilitate discussions on additional ways to repeal the unworkable portions of the law and replace them with common-sense, patient-centered reforms.

(Congressman Joe Heck represents Nevada’s Third District in the House of Representatives. He holds an osteopathic medicine degree from the Philadelphia College of Osteopathic Medicine.)