Hey, Warren! Put Your Money Where Your Mouth Is

Hey, Warren! Put Your Money Where Your Mouth Is
N&V Staff 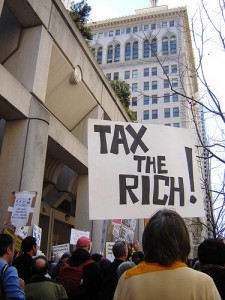 (David Mansdoerfer) – Yesterday, in an op-ed published by the New York Times, Warren Buffett took it upon himself to speak for America’s ‘super-rich’ and call for higher taxes. Now, while Mr. Buffett, who has an estimated net worth of $50 billion, is entitled to his opinion, it is time for him to put his money where his mouth is.

According to Mr. Buffett, he paid $6,938,944 in federal income taxes, or 17.4% of his taxable income. Citing just how ‘unjust’ the tax system is, Mr. Buffett noted that he paid a lower percentage than the 20 other people in his office. “Their tax burdens ranged from 33 percent to 41 percent and averaged 36 percent.”

Mr. Buffett went on to note, “I know well many of the mega-rich and, by and large, they are very decent people. They love America and appreciate the opportunity this country has given them. Many have joined the Giving Pledge, promising to give most of their wealth to philanthropy. Most wouldn’t mind being told to pay more in taxes as well, particularly when so many of their fellow citizens are truly suffering.”

Ok, Mr. Buffett, if you truly believe that the rich should pay more in taxes, you should do two things to back up your words.

First, here in Nevada, according to Forbes, we have 8 ‘super-rich’ people – Sheldon Adelson, Nancy Walton Laurie, Steve Wynn, Elaine Wynn, Phillip Ruffin, Frank Fertitta, Lorenzo Fertitta, and Alfred Mann. This list does not include several others whose value does not exceed $1 billion. I think we all would like to know how many of these people you speak for.

Here is an idea: Since you claim to play less than half the tax rate as the other people in your office, why not send a check for another $7 million to the following address?

The reason why you won’t do this is because you are all talk and no action. Prove me wrong. Prove to me that you, and the rest of your super-rich buddies, are willing to pay more in taxes to the Federal government by donating what you think you should pay. Nothing is stopping you.