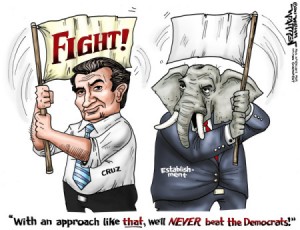 The Washoe County Republican Party held its annual fundraising dinner last night, which was blown off by the party’s supposed titular head, Gov. Brian “BS” Sandoval (R&R-Partners) because the Guv’s campaign had intentionally or amateurishly double-booked him for an event in Las Vegas on the same evening.

In his absence, Assembly Minority Leader Pat Hickey took to the podium and proceeded to talk out of both sides of his mouth, as usual.

According to a report by Ray Hagar of the Reno Gazette-Journal, Hickey complained about the GOP becoming a “small tent party.”

Of course, he left out the part where a few weeks ago he went on a Reno radio program and cheered the fact that fewer minorities and young people would be turning out for next year’s election, maintaining that was great news for Republicans. Go figure.

Anyway, Hickey went on to complain about what he calls “pup tent party politics” in which conservatives are “trying to take out ‘our own’ in primaries against Republican incumbents because they are not ideologically pure enough.”

That takes a lot of chutzpah for a moderate who is behind-the-scenes trying to unseat a fellow conservative legislator in Douglas County, Assemblyman Jim Wheeler.

Hickey then invoked Ronald Reagan’s name, a standard defense tactic of moderates trying to excuse their lack of conservative conviction, calling for “principled center-of-right conservatism, that is inclusive, not exclusive, like Reagan was.”

I think he meant right of center, not center of right – which makes no sense – but let’s not quibble.

Of course, Hickey is completely misrepresenting Reagan in an effort to deflect well-deserved criticism of his band of Gumby Republicans in the Assembly this last legislative session.

What Hickey and the Gumbies want – and this includes Gov. Sandoval – is a Republican Party that stands for nothing so they’ll feel comfortable not having to actually fight for something.

It’s the difference between being comfortably numb in your minority party status, happy to pocket some table scraps from the Democrat majority, rather than doing the hard work of being a true opposition party.

Look, I don’t mind having moderate confrontation-averse, political conscientious objectors like Pat Hickey in the big tent. But he should be one of the spectators, not the ringleader.

And if he truly wants to emulate Ronald Reagan, then he should be “raising a banner of no pale pastels, but bold colors which make it unmistakably clear where we stand on all of the issues.”

In reality though, a banner of pale pastels would be a dramatic improvement over the current practice by Hickey and the Gumbies of raising a white flag at the sound of a popped balloon.

The problem in the GOP isn’t the conservatives, the libertarians, the tea parties or the Paulbarians. And the problem isn’t some perceived political cleansing in pursuit of “ideological purity.”

But on BIG philosophical and ideological issues – like $600 million tax hikes to make government bigger – yeah, grassroots conservatives take issue with moderates like Hickey and Senate Minority Leader Moderate Mike Roberson who give aid and comfort to the other side by voting for such things.

And seriously, folks, is it really asking too much to ask candidates who run as Republicans to at least READ the party’s platform, even if they don’t agree with it 100%?

Moderate Republicans like Pat Hickey abhor the idea of conservatives challenging moderate incumbents in Republican Party primaries. And he tries to protect such moderates from challenge by invoking Reagan’s name.

But let’s not forget that such conservative challengers are simply following Reagan’s example from 1976, when The Gipper took on incumbent moderate President Gerald Ford in the GOP primary. Simply put, it’s the “right” thing to do.

So step up to the plate conservatives. Challenge the RINOs and the Gumbies. Bring on Conservageddon!