How The West Lost The Right To Play Poker 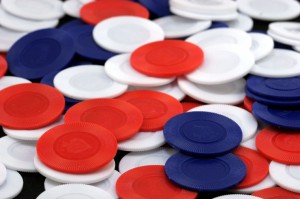 (Lori Piotrowski) – One of the images of the West is a tableful of men sitting at a round table, smoking, drinking, and playing poker. Who can forget the legends surrounding Doc Holliday and Wild Bill Hickok, or the Hollywood westerns featuring the likes of John Wayne, Clint Eastwood, Lee Van Cleef, as they sat down for a game.

Stetsons cocked, smoke curling slowly from fat stogies, glasses of whisky at the ready. This vision is engraved on the minds of people throughout the world. Yet, slowly, but surely, the rights to smoke, drink, and play poker are being eroded in this generation.

Throughout the years, thousands have gathered for a friendly game, and multitudes more have traveled to Las Vegas, Reno, and later Atlantic City, to lay their stakes on a game or two. And as is bound to happen in a capitalistic society, a few entrepreneurs recognized that two powerful entities—poker and the Internet—could be combined to the benefit of those entrepreneurs as well as poker fans throughout the world.

Everyone was happy. Or so we thought.

In 2006, in the dead of night, the Senate passed a bill to limit online gaming. For several sessions, Republican members of Congress, who felt that a more stringent hold needed to be placed on the American public, tried to pass bills that limited an individual’s right to decide how to spend his or her time and money. Those bills failed.

Two final bills were introduced in the House and later combined into the Leach/Goodlatte bill, which was passed and sent to the Senate for a vote. It was late in the session, and Senator Bill Frist was not about to let the anti-gaming legislation die. He determined that to ensure the bill’s passage, he would attach it to a bill that had the overwhelming support of both Democrats and Republicans, the SAFE Port Act.

What does online gaming have to do with port security? Only Frist knows for sure.

UIGEA is ambiguous on many issues, but this spring, the Attorney General acted by issuing federal arrest warrants for eleven owners/operators of the three most popular online gaming sites: Absolute Poker, Full Tilt Poker, and Poker Stars.

The warrants were issued on April 15, which was no coincidence, according to Brian Mogelefsky, a professional poker player.

“[The Department of Justice] had the order for the indictment in early March, and they didn’t release it until April 15th. I think they wanted to make sure that all of the online poker players filed [their taxes] before this happened because if the [DOJ] would have done that in March, a lot of people would have felt that their money was locked up on there: “I’m not going to file my taxes because the government has my money.”

And that’s part of the larger issue. The government issued arrest warrants for companies operating legally outside of the U.S. borders, and has now frozen their assets. Assets, by the way, that are actually the wagers and winnings of online poker players. (A few days later, the DOJ allowed Full Tilt and Poker Stars to re-open their sites to allow U.S. players to collect their funds. In late June, Full Tilt was shut down by the British government.)

As a demonstration of the bizarre double-think that exists in Washington, on April 13th, the city of Washington, DC, passed a measure to allow online gaming. With the blessings of the Attorney General. Ostensibly to help ease the city’s budget deficit.

In June, two bills were introduced in the House to regulate online gaming. On June 17, HR2230, or the Internet Gambling Regulation and Tax Enforcement Act of 2011, was introduced. This bill would amend the Internal Revenue Service code to allow for regulation and taxation of online gaming. The bill’s sponsors are Representatives Jim McDermott (D-WA), John Campbell (R-CA), and Barney Frank (D-MA).

On June 24, U.S. Rep. Joe Barton (R- TX) introduced HR2336. The Online Poker Act of 2011 is a bill to legalize online poker by putting online gaming under the purview of the states, and it is sponsored by both Democrats and Republicans. The Poker Players Alliance, PokerStars, and Full Tilt favor this legislation; however, the American Gaming Association has decided it will put forward its own bill in the fall.

Mogelefsky continued, “Instead of passing the UIGEA, they should have regulated online poker, and then they could have been regulating and taxing it all this time. I mean, it’s so funny because online poker is the only industry I’ve ever heard of that’s been begging the government, ‘Please regulate and tax us.’”

Mogelefsky is a member of the PPA, an organization that represents the players and works to pass legislation for online poker. When commenting on the new legislation, he recognized the duality of what the DOJ has done and how the Federal government benefits.

“I think the case will probably never go to court. I would highly doubt that would happen, but the DOJ already accomplished what they wanted, so they win regardless of whether they can convict or not. They’ve already shut the site down from accepting U.S. players.

“Full Tilt is in financial trouble. [The government] had hundreds of millions of dollars in seized assets, so they’ve accomplished what they wanted to do. Even if it ended up being if the sites were innocent and they were able to overturn the verdicts, these businesses have still lost.”

And that’s how the West was lost.