How to Reduce Class Sizes while Reducing the Budget 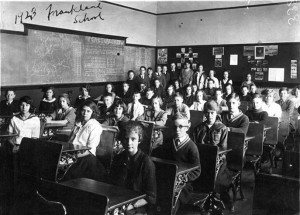 In invoking hyperbole and rhetoric worthy of NSHE Chancellor Dan Klaich, the Clark County School District is moaning and groaning about much-needed budget cuts coming its way thanks to Gov. Brian Sandoval standing firm on his commitment not to raise taxes. Indeed, school board President Carolyn Edwards, a teacher’s union shill, lamented in a LVRJ story last week that “I think we elected the wrong governor.”

Um, except that Rory Reid also promised not to raise taxes. I guess Ms. Edwards, like most voters, believe that Reid, unlike Sandoval, wouldn’t have kept his promise. Go figure.

In any event, the school district is warning that budget cuts could result in laying off 2,500 government workers, including “educational computer strategists (huh?), literacy specialists (um, didn’t they used to be called English teachers?), and support staff (you mean like the assistant deputy to the deputy chief of the assistant principal’s janitor?).”

But that doomsday scenario only comes about if the teachers union refuses to take pay cuts like everyone else. It’s all up to the union. If school personnel take some minor pay cuts, they’ll save the jobs of a lot of their colleagues, as well as many educational programs. But since the union doesn’t give a damn about the kids, expect them to dig in their greedy little heels, forcing the school district to make budget cuts that otherwise would be unnecessary.

The other complaint is about the option of increasing class sizes to save money.

As you may have seen, that 1990’s boondoggle “class size reduction” program – which has sky-rocketed in costs while resulting in no discernable improvement in student achievement – was defended by its creator, former Democrat Gov. Bob Miller, in an op/ed last week. Regardless of the fact that the program doesn’t work as advertised and costs way too much, Miller said we should keep it because…well, basically, because parents feel good about it.

Yes, it’s easy to fool naïve parents into thinking that smaller classes headed by an incompetent teacher using an academically lame curriculum in a failed public school monopoly will actually help students learn better. But here’s a way for the school district to have its cake and eat it, too.

Class sizes would then remain exactly where they are today without costing the state one additional dime. The parents who would love to remove their kids from public schools but otherwise couldn’t afford to will be thrilled. And all those parents who feel good about Nevada’s all-but-worthless class-size reduction program can remain comfortably numb in their delusion.

Do you think any school district would ever consider targeted vouchers to alleviate classroom overcrowding unless forced to by taking “revenue enhancements” off the table? Of course not. Which is why it’s so important for Gov. Sandoval to stay the course.