I Was In Charge Of The Yucca Mountain Project – Until Obama Shut Us Down. Let’s Bring It Back.

I Was In Charge Of The Yucca Mountain Project – Until Obama Shut Us Down. Let’s Bring It Back.
N&V Staff 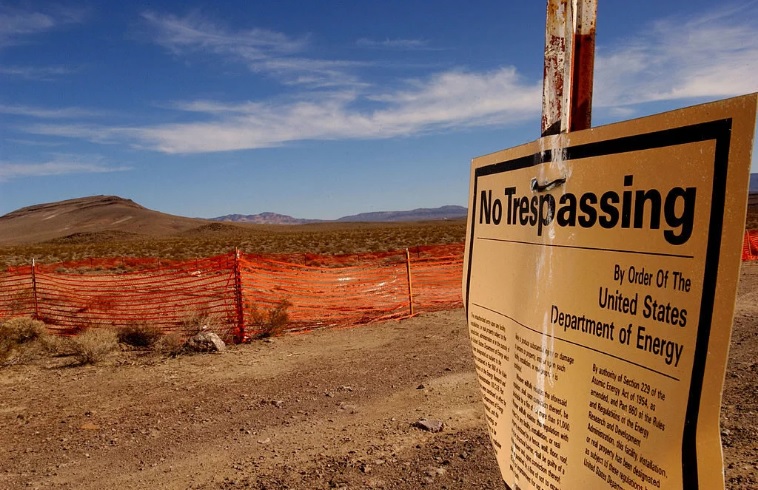 (Christopher Kouts) – As one of the former directors of the Department of Energy’s program charged with disposing of spent nuclear fuel and Defense high-level radioactive waste, we had high hopes for the Yucca Mountain project.

And then the Obama Administration, for political reasons, suddenly shut us down.

Unshielded, these materials would provide a lethal radiation dose to a nearby person in minutes. All of this waste currently sits in cooling pools or in storage facilities at over 70 sites. With the ending of the Obama Administration, the nation has an opportunity to finally address its longstanding commitment to dispose of these materials.

Prior to President Obama, the nation had followed through on a well-constructed plan to find a long-term geologic repository for all of our nuclear waste, as directed in the Nuclear Waste Policy Act of 1982.

In 1987, for primarily fiscal reasons, the original Act was amended to focus scientific studies on the highest rated and safest geologic repository site – Yucca Mountain, Nevada.

The vote in the U.S. Senate at that time to select the Yucca Mountain site for further study was 98-2.  The U.S. House vote was also overwhelming.

The Yucca Mountain site was exhaustively studied for over 20 years, during which time over eight billion dollars was expended on its evaluation. The Department of Energy submitted the Yucca Mountain license application to Nuclear Regulatory Commission (NRC) in June 2008.

That application was under review by the NRC when the Obama Administration took office in January 2009 and a decision on the safety of the site, by law, would have been rendered in 2012 – over four years ago.

However, during the 2008 Presidential campaign, a backroom political deal was reached between then Senator Barack Obama and Senator Harry Reid. Simply put, if Reid moved up the Democratic Party Nevada Caucuses several weeks to allow Obama an early primary victory then, if Obama were elected, he would stop the Yucca Mountain Project.

The Obama/Reid political arrangement has been discussed publicly in various Congressional Hearings and is a matter of public record.

After President Obama’s election, the program was subsequently starved of funds and the remaining 850 Federal employees and contractor staff were either fired or dispositioned elsewhere. The records for the program were mothballed and sent to a Federal records graveyard in West Virginia with their retrievability questionable.

The sheer hubris of the Executive Branch unilaterally terminating a program that had been legally progressing to a conclusion was virtually unnoticed in the press due to the 2008-9 financial crisis.

To attempt to fill the void it had just created, the Obama Administration directed the Secretary of Energy to establish a “Blue Ribbon Commission” to look at other options for high–level waste disposal.  After two years of monotonous droning of public hearings and meetings, the Commission came up with the pre-programmed conclusion that the current path (disposal at Yucca Mountain) was not workable.

That Commission then recommended that the nation should effectively start over looking for geologic repository sites – setting back progress in this area nearly 30 years.

With the completion of that report in 2012, exactly no progress has been made on alternatives. In addition, no serious attempt has been made at new legislation on this issue or the pursuit of another policy path, since the Obama Administration’s political objective of satisfying Senator Reid had been accommodated.

That accommodation, however, was done at the expense of the rest of the United States.

As I testified before Congress, the Obama Administration’s decision to shut down the Yucca Mountain Project is troubling because Yucca Mountain has not failed any technical or regulatory test. The thousands of our brightest scientists and engineers that worked on this massive undertaking believe, as I believe, that the site would meet the stringent regulations of the Environmental Protection Agency and the NRC and assure the long-term safety of the public from these materials, thereby protecting future generations and the environment.