If Reality Bites – Bite Back! 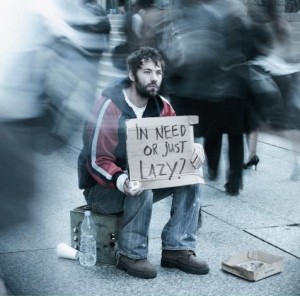 (Chuck Muth) – If we really want to pull our nation out of this economic abyss, perhaps it’s time to stop babying, coddling and wet-nursing the unemployed.

Welcome to Harsh Reality 101! Your instructor today is Bryan Anderson, author of No Turning Back. (Read it!)

Bryan joined the Army in 2001, just before 9/11. He then served two tours of duty in Iraq. On October 23, 2005, the Humvee he was driving was blown up by an IED. In the attack, Bryan lost both legs above the knee, as well as his left arm. So when he writes critically about unemployed homeless veterans on the street – perhaps the most sympathetic of figures in all of American society – he’s speaking from a decidedly strong position of moral authority.

“I know this might sound harsh, Anderson writes, “but when I see a veteran wearing filthy rags, sitting on a sidewalk, and begging for change because he’s obviously a drunk or an addict, even if he’s an amputee, I think his situation is his own fault.”

“Maybe life dealt guys like this a lousy hand,” Anderson explains. “They lost their job, the Veterans Administration wouldn’t help them, or they lost a loved one or got kicked out of their house. I know that these things happen, and they’re devastating. I’m sympathetic to that – but only up to a point. Once these veterans start living on the street, that’s a choice, and it’s a bad one.”

“When I see people wearing the tattered remains of their uniforms while sitting in their own filth, asking for pity, it makes me angry,” the skateboarding/snowboarding triple-amputee continues. “I can’t respect someone who would rather scrape through each day looking for a drink or a fix to dull their pain than muster the discipline to fight through it and take back their own life.”

Anderson notes that the military teaches every “buck private” to be self-sufficient, and doesn’t understand why someone with that kind of training would choose to just sit on the street and ask for charity. “That’s not what a soldier is trained to do. A soldier is supposed to get up and find a way forward, no matter what.”

Anderson’s harsh reality advice to these homeless vets: “Stop doing what doesn’t work and try something new. Visit a homeless shelter and get a shower. Go to the Salvation Army and get some clean clothes. Sign up with a temp agency and go on job interviews until someone hires you.”

“Step by step, take your life back,” urges Anderson, who has appeared on the cover of Esquire magazine. “If you’re in a bad situation, you need to pick yourself up and do something about it. Don’t wait for solutions to come to you. Make your own answers. Giving yourself over to any kind of crutch – whether it’s booze, drugs, pity, lashing out in anger, or whatever you might use to avoid accepting responsibility for your life – is the wrong approach to surviving.”

Now…if that kind of “tough love” from a triple amputee is good enough for disabled homeless veterans, why isn’t it good enough for all those “unfortunate” Americans currently working towards their 99th week of unemployment? The fact is…it is. Indeed, I’m with Bryan Anderson. It’s time to stop subsidizing sloth and encouraging codependency on government.

“I have a news flash for you,” continues Anderson, “the world doesn’t owe you a living.” He adds that “a person who has been coddled becomes dependent. All he or she has been taught to do is take, consume and demand more. How can people spoiled that way ever learn to give, sacrifice and think more about others than about themselves?”

And I double-dog dare any able-bodied, red-blooded American who has been on unemployment more than 13 weeks to tell this triple-amputee military veteran that he just doesn’t understand how tough YOU have it; that your circumstances are different – and it’s somebody else’s responsibility to fix it.

Ron KnechtOctober 23, 2021
Read More
Scroll for more
Tap
Nevada Caucus Process Flawed, But Does Have Good Points
Who Will Speak Up When They Come For You?