In a growing market for cheap solar power, subsidies keep the lights on

In a growing market for cheap solar power, subsidies keep the lights on
N&V Staff 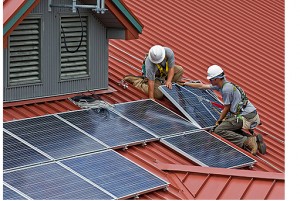 (Chuck Muth) – The California company SolarCity estimates that it will install 1 million new rooftop projects in the next five years and that they sign up a new customer every five minutes. In fact, six of the ten largest US homebuilders offer a solar panel option in the construction in new homes.

According to the Solar Energy Industries Association, there are roughly 270,000 solar rooftop systems in the United States. State and federal tax credits, renewable energy mandates, and customer rebate schemes result in artificially low solar energy costs that are driving up demand for solar power.

Behind the increasing popularity of solar energy, however, lies a complex set of government incentives that distort the overall energy market to the detriment of not only energy utilities, but millions of customers as well.

When a customer opts for solar panels, they enter into a complex relationship with companies like SolarCity or Sunrun, who pay the upfront costs of the solar installation. That customer pays a small monthly rate for power over 20 years and signs over all of the tax credits, incentives, and rebates to the company.

Created is a system where taxpayers foot the bill for the installation of solar panels, which can cost upwards of $30,000. In California, for example, more than $3 billion in government funds exists for solar panel installations over the next 3 years. Companies like Al Gore’s Generation Investment Management reap the benefits of millions of dollars in taxpayer money for their involvement.

On top of the vastly expensive government incentives, a concept known as “net metering” also distorts the real cost of energy.

When a solar customer generates more power than they immediately need, utilities pay the customer for the power that is sent back onto the energy grid. A customer’s electricity meter spins backwards and the customer’s power bill is credited.

When the sun goes down, however, solar customers need energy to keep the lights on and thanks to a well maintained power grid and power generation stations, energy flows back to homes with solar units. The utility pays a higher retail rate for the energy they get from homeowners, creating a system where solar customers aren’t paying their fair share for energy use.

This is at the heart of a fierce political debate taking place in Arizona this month. Utilities are asking that customers pay their fair share for the energy transmission and delivery costs when it’s dark outside. Without such a change in the exchange rate, roughly a million customers are subsidizing the use of solar power by 18,000 wealthy homeowners. Similar debates are taking place in California, Colorado, and Nevada.

Support for the solar industry has been intriguing. Even some conservatives have sided with the solar industry in Arizona likening the issue to the school choice debate. Unfortunately, when traditional energy customers (most) pay the market price for power and a select few don’t (solar), the debate isn’t at all about choice. It’s about picking winners and losers at a very high cost.

In Georgia last year, the Atlanta Tea Party supported a new command and control regulatory regime that forced Georgia Power to have more solar generation. The resulting higher costs for electricity, passed down to the ratepayer, were ignored. A Republican member of the Georgia Public Service Commission who supported the mandates said, “the sun is shining, and that is free energy.”

Solar use is far from free.

It remains the most expensive source of energy by far, and its capacity factor – which measures how often a generator can run for a period of time – is far lower than that enjoyed by coal, natural gas, and nuclear, which can continuously produce full power for much greater periods.

Solar is a popular new energy source for consumers because the costs are hidden. Taxpayers nationwide foot the bill for the propping up of an industry that contributes little to the reduction of greenhouse gasses and unnecessarily penalizes traditional energy producers. By distorting the market with countless subsidies and mandates, we are putting at risk our competitive global advantage in the energy sector.

Instead of attacking state utilities as monopolies while propping up the solar industry, conservatives should advocate for deregulated utilities so that the free market and competition can dictate energy costs. By siding with the one percent of solar users and the solar industry, conservatives are abandoning free market principles in exchange for crony capitalism and more government mandates.

At the very least, minimum contributions from all customers – including solar – are a fair way to prevent the poor from subsidizing the rich. It’s common sense to require solar users to pay for some of the infrastructure costs of receiving power when the sun isn’t shining. Net metering programs should be revised to reflect market costs, instead of an artificial market paid for by non-solar customers.

The solar industry may one day actually be competitive in the energy market but its reliance on government should concern all free market conservatives, who would be wise to stay away from contemporary solar activism.