In Defense of Carolyn Goodman: Anatomy of a Media Mob Hit

In Defense of Carolyn Goodman: Anatomy of a Media Mob Hit
N&V Staff 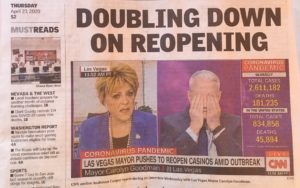 (Chuck Muth) – Today we’re going to talk about the “hit” media assassin Anderson “Pretty Boy” Cooper of fake news CNN did on Las Vegas Mayor Carolyn Goodman this week.  But first, let’s make sure everyone completely understands exactly where we are on the COVID-19 crisis.

By all accounts, the virus that’s infected millions worldwide originated in Wuhan, China and is extremely contagious.  And there’s no cure, treatment or inoculation on the horizon anytime in the foreseeable future.

So as long as there is ONE PERSON infected with the virus, there’s the possibility that it could spring up again at anytime, anywhere…from now until at least the end of the year.

Who among you wants to keep Nevada closed until Christmas?

(Put your hand down, Gov. Sisolak)

Nevada WILL re-open before the Wuhan virus is completely eradicated.  Which means there will ALWAYS be a chance for new flare-ups.  So the question isn’t *if* we’ll reopen – but when and how.

Nevada Gov. Steve Sisolak, obviously relishing the authoritarian power he hath bequeathed upon himself, has no desire to give it up anytime soon.

On the other hand, Mayor Goodman has always maintained that the governor’s imperial orders have been an over-reaction, frustratingly discriminatory and contradictory, and too heavy handed.

And she wants her city to begin the process of re-opening…NOW.

Which brings us to Tuesday’s interview with Pretty Boy Cooper and the media mob reaction afterwards that had herds of citizen-sheep calling for her to be burned in effigy.

Not only did Cooper, in typical CNN fashion, riddle the Mayor with “gotcha” questions, he constantly tried to put words in her mouth, including frequent, often scornful, interruptions that mischaracterized her positions.

As White House correspondent and columnist Debra Saunders put it…

“Let’s be clear about the intent of that (25-minute) sitcom-length (interview). The idea wasn’t to explore how a tourism mecca could open for business – as an actual news story might do. This was pure theater, reality-TV dressed up as journalism…”

“What’s especially irritating about Cooper’s preening-not-probing is his apparent belief that it’s his job to ridicule anyone who wants to open America for business. … CNN has a narrative, and no fact will get in the way.”

Don’t we know it!

So, let’s go through the Pretty Boy Cooper hit, piece by piece, starting with the post-interview graphic heard ‘round the world…

The split-screen graphic was so misleading it ain’t even funny.

You’re supposed to believe that Mayor Goodman said something so outrageous that Pretty Boy grabbed his face (violating COVID-19 protocols in the process) in disbelief at what she had just said.

Total BS.  Here’s what really happened in case you missed the actual interview…

“I love watching our people here. They’re so careful.  We work every single day.  I have not missed a day.  And anybody who is in or comes into the office that needs an appointment or has an issue, they all are with their masks on or we always enforce social distancing.  And the office is absolutely pristine.”

Hardly controversial.  And bear in mind this particular exchange occurred some sixteen-and-a-half minutes into what was supposed to be a two-to-three-minute interview.

Now, just as Mayor Goodman started saying “…comes into the office…”, Pretty Boy removed his glasses – understandable for such an unexpectedly long segment – and simply wiped his eyes before putting his glasses back on, with absolutely no facial display of incredulity whatsoever.

So the idea that he did a “face palm” reaction to what the Mayor was saying is flat-out false and journalistic malpractice for anyone suggesting otherwise…as Las Vegas Sun publisher Brian Greenspun did in an editorial today which described Cooper as “burying his head in his hands, as if trying to remove himself from the reality of her words.”

Then there was the mob pile-on claiming the Mayor was trying to speak for the casinos and workers at resorts on the Strip.  For example, the banshees over at the Culinary Union issued a grammar-challenged statement declaring…

But the Mayor never said she did.  In fact, she was VERY specific in stating otherwise…

“I speak with the owners of our CITY casinos every day almost.”

Emphasis on “CITY” was her emphasis in the interview, not mine.

She later added: “Not the Strip hotels.  That’s under the jurisdiction of the county; our unincorporated county.  Our jurisdiction here is Las Vegas.”

You can go watch it yourself if you don’t believe me.

And for the record, while it is, in fact, technically true that the Strip is in Clark County, not the city of Las Vegas, ask just about any Clark County resident where they live…and they’ll respond, “Las Vegas.”

Oh, and that iconic “Welcome to Las Vegas” sign at the south end of the Strip?  It’s in Clark County.

So even the Strip wants to be associated with Las Vegas, not Clark County.

A Tale of Two Restaurants

Next was the segment where Cooper tried to sandbag the mayor by showing a graphic, supposedly of a restaurant in China, demonstrating how one diner with the Wu-Flu possibly infected others seated at adjacent tables.

Goodman: “This isn’t China.  This is Las Vegas, Nevada.”

Pretty Boy cuts her off: “That’s an ignorant, ignorant statement. That’s a restaurant, and yes, it’s in China.  But they’re human beings, too.”

Ah, here we go again.  Whip out the ol’ race card.  Don’t leave home without it.

It’s the same thing CNN and the media mob did to President Trump when he appropriately and accurately referred to the Chinese coronavirus as the “Chinese virus.”

In any event, how is it “ignorant” to rightly point out that comparing a restaurant in Wuhan to a restaurant in Las Vegas is apples and oranges?  And the question had absolutely NOTHING to do with Chinese “human beings.”

What did Debra Saunders write again?  Oh, yeah: “CNN has a narrative, and no fact will get in the way.”

Send in the Alarmist

Back to the beginning.  The interview started off hostile right out of the gate.

Under grilling by Cooper, Mayor Goodman said she “wanted” everything to open back up – including hotels, casinos, conventions and restaurants – “so our people can go back to work.”

How is that controversial – unless you DON’T want people to go back to work?  Is that what all the Stage 4 sufferers of Goodman Derangement Syndrome are saying?

Pretty Boy then declared that opening the state back up to tourism sounded like Goodman wanted to create “a virus petri dish.”

So professional.  So unbiased.

To which the Mayor responded, “No, what it sounds like is you’re being an alarmist.”

Nailed it.  And got Pretty Boy’s hackles rankled.

“I’m being an alarmist?” he asked with that patented smirk on his face.

At which point he started with the “gotcha” questions…

“So you don’t believe there should be any social distancing?” he accused, falsely.

“Of course I believe there should be,” Goodman responded.  “Of course.”

“How do you do that in a casino?” Cooper parried.

“You’re offering nothing other than being a cheerleader.”

So professional.  So unbiased.

Putting Words in Her Mouth

But the Mayor was absolutely correct.  Once businesses reopen it’ll be up to the business owners to institute and enforce various safety precautions, such as sanitizing and social distancing – including casinos.

That’s decidedly, as Goodman noted, “not the mayor’s job.”

As the Mayor pointed out, free-market competition will sort much of this out with the public – as it already does.  Or rather, as it DID before the #SisolakShutdown.

Indeed, if you own a greasy-spoon diner where the bathrooms are filthy, there’s a good chance people ain’t gonna wanna eat there.  That’s why the more successful restaurants make sure their bathrooms are spotless, and often post signs on the door chronicling how often during the day the bathrooms are cleaned.

What’s so difficult to understand about this?

Casinos that re-set their floor plans and take other precautionary measures are likely to attract more business from folks who have any lingering concerns about picking up the Wu-Flu.  Why would an elected official make such decisions?

“That’s your opinion of what you think I’m saying,” Goodman shot back.

“You’re the one saying we’ll all be fine,” he accused.

“I said open up Las Vegas,” Goodman continued, as Pretty Boy talked over her.  “Let us get started and go back to work.  We have all been out of work and (people) can’t even feed their families or take care of their families.”

To which Cooper later snidely accused, “OK, that makes no sense.”

“Maybe it doesn’t to you,” Goodman replied.  “It does to us here in Las Vegas.”

When and How: Where’s the Plan?

I could go on and on about this Pretty Boy Cooper hatchet job and subsequent media mob hit from start to finish, but I need to go risk grandma’s life by making a beer run to Albertsons.

“The reality is, he (Dr. Anthony Fauci) has said this very serious disease that’s out there could last into December, could recur every year and could be part of something we could be dealing with for a long, long time.

“So taking that into consideration, and that once you’re diagnosed that you’re positive we have no preventive treatment other than staying away from everybody – which is your choice to do; and it’s been asked by our governor, and everybody’s doing it.

“But with no timeline, no treatment and no cure, no vaccine, this could go on for months or even a year.”

Who among you wants to keep Nevada closed for another year…you know, just to be on the “safe” side?

(Put your hand down, Gov. Sisolak)

Unlike Pretty Boy Cooper, I’m gonna let the Mayor have the last word…

“Please let us open the City of Las Vegas.  Let us get back to business. …  All I’m asking for is a plan.”