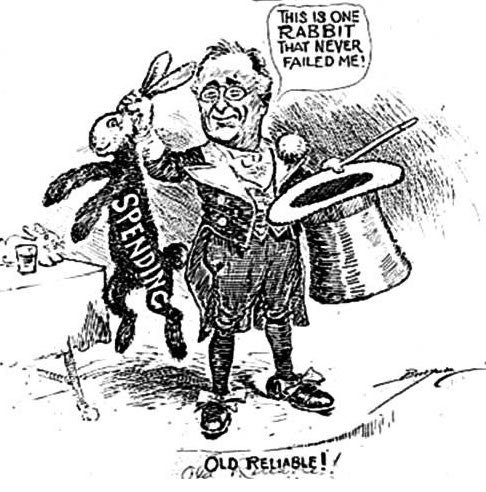 (Seton Motley, RedState) – We, American conservatives, have long loathed our domestic Farm Bill – for many, many very good reasons.  It is a Franklin Delano Roosevelt-New Deal collectivism relic – filled-to-the-brim with centralized nonsense that hamstrings our farm sector.  Our government forces farmers to spend a lot of time, effort and money doing things that are unproductive and counterproductive.

And in government, no bad idea goes unreplicated.  With the advent of global farm trade – our ridiculous policy has inspired similar ridiculous policy all over the planet.  Commodities-exporting countries matching us tariff-for-tariff and subsidy-for-subsidy.  With their stumbling upon all the awful results, we get – just about sour-note-for-sour-note.

And as is nigh always the case – government learns all the wrong lessons from its encounters with Reality.  To wit – India.

Farm Subsidies Put India in Bind: “The nose-dive in global commodity prices has had an unexpected repercussion in India: a giant new subsidy bill as New Delhi spends billions to mop up wheat, rice, sugar and cotton at government-fixed prices…’This is a crisis of plenty,’ said Harish Galipelli, a trader at Inditrade Derivatives and Commodities.”

(Let us leave aside how close are “New Delhi” and “New Deal.”)

It is inherent human nature: Of anything you subsidize – you will get more.  Why have global commodity prices nose-dived?  In large part – because governments subsidize their production.  So farms don’t grow what the market wants and needs – they grow what governments will pay them to grow.  So you end up with overproduction:

The market support… encourages farmers to produce much more of the subsidized commodities than they would have otherwise, exacerbating the global glut.

But wait – it gets even more anti-intellectual:

“India guarantees minimum prices for certain crucial crops to protect its large population of poor farmers. When prices plunge, it has to buy more. It usually sells the commodities it collects at a loss—some to India’s needy and some on global markets. Some of the stockpile just rots in government warehouses.”

Again, bad government here begets bad government everywhere.  And vice versa.  And round and round we go.  A regulatory arms race.  A government merry-go-round that appears only to accelerate – until the whole thing spins off its hinges.

“The government’s commodity price support also has the potential to hurt world markets. India has already been looking for ways to release more of its wheat and sugar surplus on the global markets.…”

Wait – “the potential to hurt world markets?”  That ship has long since sailed – and sunk.  India wants to dump its stupid government on the rest of us.  Which will kick in our domestic Farm Bill subsidy inanities – and similar inanities of governments the world over.

Government officials say they have no plans to reduce the subsidies….(India) even threatened to scuttle an important World Trade Organization agreement in 2014 unless it was given a guarantee that it could continue its subsidy and stockpiling programs.  ‘Subsidies are meant to encourage productivity and better farming practices,’ said Sudhir Singh, an official at India’s agriculture ministry. ‘We are committed to our social-welfare programs.’

The road to Hell is paved with regulations – and government money.  This hard-headedness reminds of the old joke:

Patient: “Doc, it hurts when I do this.”

There is a better way:

“‘Farm subsidies hurt an economy simply because they are a distortion,’ said Tim Worstall, senior fellow at London’s Adam Smith Institute. ‘It is far better to have a no-subsidy economy.’”

A “no-subsidy economy?”  That sounds outstanding – and an awful lot like this:

Florida Republican Congressman Ted Yoho has put forward on Zero-for-Zero a ‘Sense of the House’ resolution, ‘Expressing the sense of Congress that all direct and indirect subsidies that benefit the production or export of sugar by all major sugar producing and consuming countries should be eliminated.’

Something to build on – and build out from.

Rather than continuing the uber-government uber-failures of the last eight decades.  With the serial visual aides of here, India, Brazil,….

As with nigh, all things government: Less is more – and zero is best.

N&V StaffOctober 7, 2022
Read More
Scroll for more
Tap
What Do Nixon, Einstein, the Titanic and Critics of the U.S. Sugar Program have in Common?
Barack’s Potty Patrol: Pimping For Potential Pervs