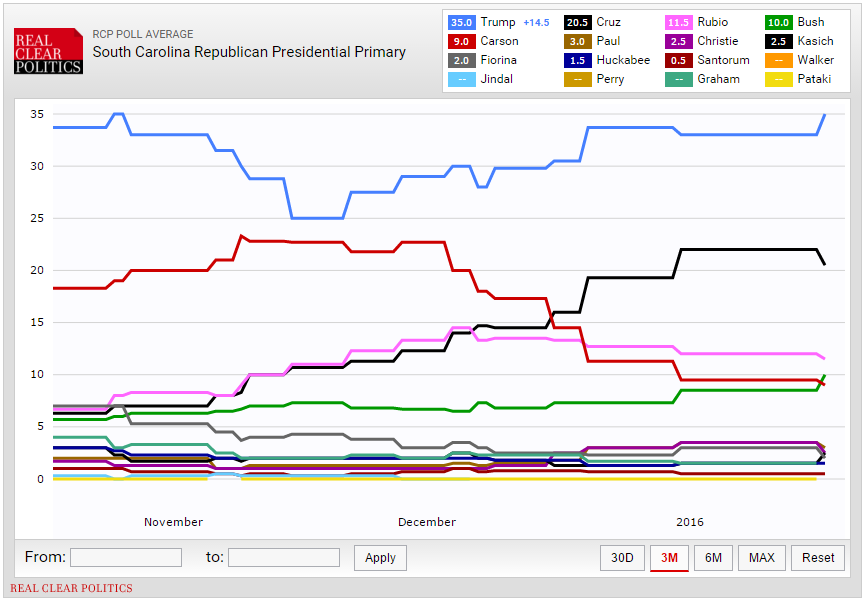 The graph shows the inconsistent pattern of election surveys of Republican presidentiables from November of last year up to January 17, this year.

Same reason the Kardashians grace the cover of magazines at the supermarket checkout: They’re somebodies because they are.

In two weeks from today, Iowans – some Iowans, will go to someplace in their town or neighborhood, listen to speeches in favor of one candidate for President or another, and cast a vote for their favorite.

Grand Avenue in Des Moines will be packed with reporters, campaign staff, influence-peddlers, and hangers-on as they talk to each other, passing along rumors overheard at a bar, nuggets overheard from network correspondents chatting off-camera, and items overheard by the wait staff at the 801 Chop House.

And the results will matter.

Trump and Cruz on the R side, and Clinton and Sanders on the D side are faced with walking a messaging tightrope: They need to demonstrate to their supporters that they have the organizational strength to win, but they don’t want to set the bar too high. That is, if they come in second, they need to be able to explain it to a skeptical (and weary) press corps.

On the Republican side, if Ted Cruz comes in first and Donald Trump second (or lower), that may not spell doom for the Trump campaign, but they will have to pull out all the stops to win in New Hampshire.

If Trump were to lose the first two tests, the bloom might be off the rose and he would have to grind it out through the next two or three months like everyone else.

On the other hand, if Jeb Bush were to get low single digits of support, there will be great pressure for him to get out and throw his support (and money) behind one of the other “establishment” candidates heading into New Hampshire eight days later.

That holds true for other establishment candidates, as well.

It is likely that candidates like Mike Huckabee and Rick Santorum, maybe Carly Fiorina and Rand Paul or some others will decide to throw in the towel after the results come in from the caucus sites.

On the Democratic side, if Bernie Sanders beats Hillary Clinton (by no means a certainty at this writing) then the specter of 2008 will be front-and-center.

Senator Barack Obama won the 2008 Democrat Iowa Caucuses. When I say “won” I mean he got more votes than anyone else: 37.6 percent. He “won” because Hillary Clinton and John Edwards split the other 60 percent almost down the middle.

If Edwards had not been in the race, the overwhelming percentage of his votes would have gone to Hillary, not Obama. Obama would have been an interesting story, but we would likely have been watching Hillary Clinton be sworn in on the West Front of the Capitol on January 20, 2009.

The Clinton campaign is taking the challenge from Bernie Sanders seriously. The one of the debate Sunday night spoke volumes that the campaign of Hillary Clinton is no longer strutting across the national political stage but has exhibited considerable fretting.

As if the Hillary campaign didn’t have enough to worry about, Donald Trump made an offhanded remark during the Republican Debate last week suggesting he thought that if he were the nominee he could win New York.

That sent the Clinton planners scurrying back to their spreadsheets to look at the general election plan.

Why? Because Democrats don’t general plan on spending much more than subway fare to win New York. Any more than the GOP plans to spend very much on Texas.

But, if Trump is the nominee and makes a real effort to compete in New York, Democrats will have to divert tens of millions away from places like Florida and Ohio where they know they will have a tough battle.

It is not likely that any of the other Republican candidates would mount any more than a cursory effort in New York, so the Ds are (or should be) in an ABT – Anybody But Trump – mode.