Is It Possible to Make the Sherman Act Interesting? Here, Let Me Give It a Shot

Is It Possible to Make the Sherman Act Interesting? Here, Let Me Give It a Shot
N&V Staff

How many times has this happened to you? 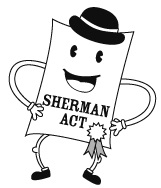 Your sitting around the dinner table and one of your kids asks, “So what do you think about the consumer welfare standard as applied to anti-trust enforcement of the Sherman Act?”

Boy, if I had a dollar for every time that’s come up at our house I’d have, well, nothing.  But just in case you’re ever challenged about this issue by a precocious teen, let me try to help out.

And while the issue DOES have relevance to your day-to-day life – in particular if you ever use Google, Amazon or Facebook – I might have to add some references to scandals, celebrities and space aliens to keep your interest, OK?  Onward…

Last June, Alden Abbott reported in The Daily Signal that the European Commission “fined Google over $2.7 billion for a supposed violation of European antitrust law that bestowed benefits, not harm, on consumers.”

“The commission,” Abbott continued, “claims that Google favored its own comparison shopping service over others in displaying Google search results.”

Now, I feel I might already be losing some of you.  So did you hear about actress Jennifer Lawrence getting caught with Sen. Al Franken in a California motel room reading “Rules for Radicals” together when a Martian spaceship landed in Harvey Weinstein’s back yard up the street?

The reason this EU anti-trust fine is something to pay attention to is because there are similar efforts to cripple big tech companies right here in the U.S., with liberal critics, including Sen. Elizabeth “Fauxcahontas” Warren, claiming these companies are just “too big.”

Of course, the reason these companies are so big and dominate their markets is because they provide services that a big number of consumers want and use on a regular basis.  If these big companies weren’t so good at doing what they do, such big numbers of consumers wouldn’t be using them.

So how is this a bad thing for us consumers?

It’s not.  But that’s not stopping big-government liberals from trying to rain on our parade.  The Bureaucrats’ Creed: Don’t just stand there; regulate something!  Or as Ronald Reagan so beautifully characterized their attitude: “If it moves, tax it. If it keeps moving, regulate it.  And if it stops moving, subsidize it.”

When the government tries to decide if a company is “too big” and needs to be reigned in through the use of the Sherman Act anti-trust laws, the guiding principle is supposed to be the “consumer welfare standard.”

In the cases of Google and Facebook, it’s hard to argue their services don’t maximize the consumers’ benefits, especially since the consumers don’t, um, pay for anything.  You can use Google for free.  You can set up a Facebook page for free.  Not sure how consumers can get a better deal than that!

Seriously, the LAST thing we need when we dial up Google.com or Facebook.com or Amazon.com is a pop-up video featuring an FTC bureaucrat declaring, “I’m from the government and I’m here to help.”

The real, true danger is from big government.  If bureaucrats really want to help, just leave us the heck alone, let us make our own decisions in the free market, and shrink yourself!

OK, that’s enough for now.  But if you want to continue following J-Law and Big Al’s excellent adventures with Harvey and the Martians, you can set up a Google “News Alert” for updates.  Another great, free service for consumers!

Mr. Muth is president of Citizen Outreach and publisher of Nevada News & Views.  You can Google either to find them.