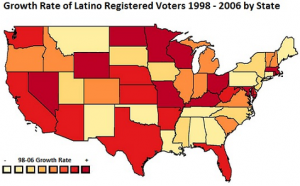 (Jim Clark) – What the **** is wrong with the Republicans?  A nationally televised GOP presidential candidate debate was held in Las Vegas last week followed by the Western Republican Leadership Conference, also in Sin City.  When it came to the issue of immigration, it was like they were playing Russian roulette with bullets in all six chambers of the revolver.

Let’s examine some facts.  First, Nevada is getting a fourth congressional seat because of meteoric growth in the Latino population over the last 10 years. Second, no other Nevada population group increased. Third, as a result Latinos now make up 26% of the Silver State’s population, 17% of its registered voters and there are just over 100,000 Latinos eligible to vote who have not yet been registered.

According to the Pew Hispanic Center, 67% of Latinos voted for Barack Obama in 2008, but only 60% voted Democratic in the Republican wave of 2010.  Moreover, in the 2004 election, President George W. Bush, who was openly sympathetic to Latino causes, won a historic high 44% of Latino votes.

Conclusion number one:  Latinos are not a Democratic voting block.  Like most voters, they support candidates who espouse issues important to them.  Conclusion number two:  you don’t have to win over 100% of Latino voters to put an election in the GOP column.

So you would think that, when the eyes of the nation are focused on Nevada, GOP candidates and officials would at least try not to offend Latinos.  But, as reported in The New York Times, “Today Republican candidates are competing over who can talk the toughest about illegal immigration – who will erect the most impenetrable border defense; who will turn off ‘magnets’ like college tuition benefits.”

Indeed, Mitt Romney harassed Rick Perry about supporting in-state tuition for illegal aliens in Texas and Perry retorted with an accusation that Romney hired illegals to tend his yard.  Not to be outdone, Michelle Bachmann promised a 1,200 mile double-walled fence along the Mexican border only to be out-promised by Herman Cain who called for such fence to be electrified.

Following the debate, participants focused on the Western Republican Leadership Conference that included a panel, featuring Bush Administration U. S. Treasurer Rosario Marin, on how Latinos can become more prosperous.  The panel concluded without time remaining for questions, which triggered a loud outburst from Republican Latinos who complained that the GOP is not doing anything to reach out to the Latino community.

“We can’t pretend the Latino vote doesn’t exist,” he said.  “It’s time we became the party of inclusion.”

Republican National Committeewoman Heidi Smith of Reno hit the nail on the head when she described the focus on illegal immigration as a “distraction.”  “It’s taking time off the big issue, and that is that we don’t have any jobs,” Smith said.

The release concluded: “Issues that need to be addressed include low graduation rates, government regulation limiting job creation and common sense immigration reform.  We need to change the dialogue and acknowledge that immigration has many faces and many skin colors.”

If one of those candidates grows up to be president, I hope he or she will quit the posturing and heed that press release.

N&V StaffMarch 4, 2022
Read More
Scroll for more
Tap
Former Governor List – Nobody is Surrendering
Heller vs. Reid In The Battle Of The Sound Bite: No Contest