NN&V: Obama 2012 Slogans Rewritten is your second book, and it’s very different from your first, Don’t Take My Lemonade Stand. Can you describe the seed idea for it and how it developed?

JJ: My story is how social media became a part of not only my book promotion, but one of how it helps me to get out my message of limited government, living within your means, and the need for a strong Defense to liberalism, that is, the principles in my book, Don’t Take My Lemonade Stand.

NN&V: What kind of response are you getting from your readers to the book? 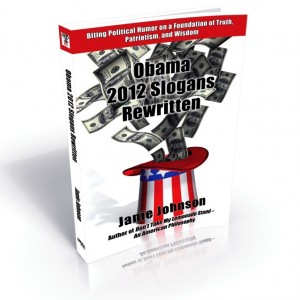 NN&V: Have you noticed a different audience is purchasing/reading this book? Can you describe who they are?

JJ: Actually, the audience for Obama 2012 Slogans and Don’t Take My Lemonade Stand – An American Philosophy are quite similar, but with a few differences. People bought and are buying Don’t Take My Lemonade Stand to better understand conservatism versus liberalism/progressivism. They wanted to understand exactly what each group believes in and why each is supported by their followers. Readers of Obama 2012 Slogans Rewritten just want to know more about how President Obama thinks, and they enjoy the often humorous format.

NN&V: What is your favorite slogan?

Ron KnechtOctober 23, 2021
Read More
Scroll for more
Tap
We Don’t Need A Harvard On I-80, GBC Is Just Fine
Nevada Caucus Process Flawed, But Does Have Good Points