Jihad at the Texas OK Corral 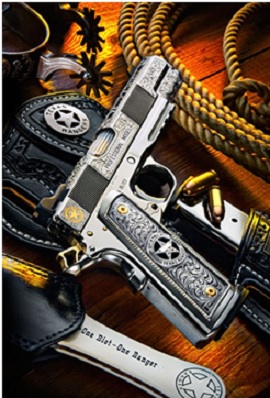 (Robert Lauer) – Almost four months ago, 12 people were killed in a terror attack at the offices of Charlie Hebdo, a French satirical magazine that published controversial Muhammad cartoons. They were killed by heavily armed and trained Radical Muslim Extremists claiming to be avenging the Prophet Mohammad. The attackers killed the responding Police Officer, who was unarmed. In fact, they shot him in the head at point blank range with their AK47.

So it’s ironic that, in Garland Texas this week, when Jihadists tried a repeat, it was the ARMED responding police officer who shot the attackers in the head. BTW, the attackers were also wearing body armor and carrying AK47’s just as the attackers did in the Paris attack. In addition, the Mohammad Cartoon contest event sponsors in Texas also hired armed guards and heavily armed police to protect the attendees. And in Texas, Americans can and do have permits to carry concealed guns.

The lessons are so obvious that the leftwing anti-gun media refused to mention them. Guns saved the lives of dozens of people in Texas. Period. There is no other conclusion to draw. If the police officer in Texas arrived unarmed, he would have been killed and so would have been countless unarmed civilians, like those in Paris who were lined up and shot.

Freedom of Speech and all the rest of the nine amendments don’t mean much without the second. Only with force can our rights be protected. Only Force has keep people free the world over. And that extends from the single mom carrying her conceal carry gun in her purse when she leaves work late at night to our nation’s military being so strong that no nation on earth would dare attack our people or national interests.

BTW, supposedly the two armed gun men in Texas and in Paris were on government watch lists. And in both cases, the governments watched them get AK47’s and watch their rants online and watch their emails and listen to their phone calls and yet both federal governments failed to protect their citizens. And Michael Moore and other liberals want to nationalize the police and take ALL guns away??

The next time a liberal asks why you need an assault weapon and more than seven bullets to go hunting, tell them the second amendment is about killing bad guys not about killing deer. And Rainbows and butterflies don’t stop 7.62mm rounds.