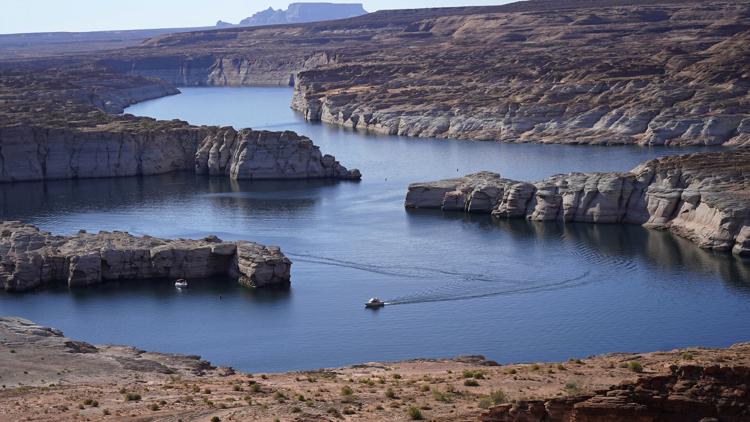 A boat cruises along Lake Powell near Page, Ariz., on July 31, 2021. Federal water officials have announced that they will keep hundreds of billions of gallons of Colorado River water inside Lake Powell instead of letting it flow downstream to southwestern states and Mexico. U.S. Assistant Secretary of Water and Science Tanya Trujillo said Tuesday, May 3, 2022, that the move would allow the Glen Canyon Dam to continue producing hydropower while officials strategize how to operate the dam with a lower water elevation.
Rick Bowmer / AP

(Merrilee Gasser) – The Bureau of Reclamation will reduce the amount of water released from Lake Powell in response to a drought situation threatening the water supply of millions of residents in several western states and hydropower generation.

The federal agency said Tuesday Lake Powell’s water surface elevation is currently at 3,522 feet, the lowest since it was first filled 60 years ago. The critical elevation is 3,490 feet and would be the lowest point where Glen Canyon Dam can generate hydropower, according to the bureau.

Tanya Trujillo, assistant secretary of water and science for the U.S. Department of the Interior, said the agency identified “a number of concerns for public health and safety” that would happen this year if Lake Powell’s water level went below its threshold of 3,490 feet including water supply interruptions to water users who rely on Lake Powell for drinking water supplies and hydropower interruptions.

“The Department has reviewed these concerns, along with input from the Basin States, Tribal leaders and others and has concluded that prudent operation of Glen Canyon Dam for 2022 requires a downward adjustment to the water release volume originally planned for this water year to delay or avoid Lake Powell declining further to critical elevations,” Trujillo wrote in a letter to the director of Arizona’s Department of Water Resources.

It’s unclear how much residents will be affected by the current plan to reduce the amount of water released from the lake this year.

The bureau said it would decrease Glen Canyon Dam’s annual release volume from 7.48 million acre-feet to 7 million. As a result, about 480 thousand acre-feet will remain in the lake. This will bring up Lake Powell to nearly one million acre-feet over the next 12 months and increase elevation by 16 feet, according to the bureau.

The agency also plans to release about 500,000 acre-feet of water into Lake Powell from the Flaming Gorge Reservoir.

“Today’s decision reflects the truly unprecedented challenges facing the Colorado River Basin and will provide operational certainty for the next year,” said Trujillo in a news release. “Everyone who relies on the Colorado River must continue to work together to reduce uses and think of additional proactive measures we can take in the months and years ahead to rebuild our reservoirs.”

The drought response actions are part of a Drought Contingency Plan adopted in 2019. To reduce the water released from Glen Canyon Dam, the bureau will keep 350 thousand acre-feet of water that was held back earlier this year and hold back an additional 130 thousand acre-feet before September.

Reclamation Acting Commissioner David Palumbo called the plan a short-term response and said it was important to continue planning for the long-term to stabilize the reservoirs.