Las Vegans Turn Out To Honor Veterans In Annual Parade 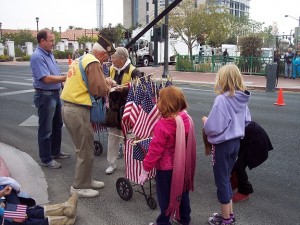 (Lori Piotrowski) – Thousands of people lined Las Vegas Boulevard this morning to celebrate Veterans Day. The cool, cloudy weather couldn’t keep them from honoring those who have served our nation. More than an hour before the scheduled start of the parade, parents and children, some in strollers, began to stake out their favored viewing spot.

The annual parade, second in size only to New York City, was hosted by KDWN talk show personality Alan Stock. KDWN’s Heidi Harris also joined in the parade, waving an American flag from the top of a decorated automobile. 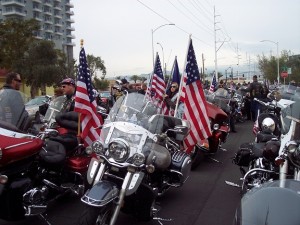 The Marine Riders, former U.S. Marine Corps veterans on motorcycles, kicked off the parade, followed by riders from the American Legion.

Soon after, Mayor Carolyn Goodman, and her husband, Oscar, the former mayor of Las Vegas, walked the parade route passing out miniature flags to the children lining the streets.

A multitude of politicians joined in the festivities. Congressman Joe Heck marched with the Catholic Veterans of America; Dina Titus with another veterans organization. Ruben Kihuen was seen circulating around the Latinos Democratic Caucus group, and John Oceguera marched with the Laborers union 872. Senator Dean Heller crisscrossed the street greeting constituents and shaking hands, while Congresswoman Shelley Berkley rode the route in a convertible.

Some of the oldest veterans, those who survived the attack on Pearl Harbor, participated in the parade. They were joined by veterans from San Bernardino and Ventura County, California, as well as the many local veterans groups and VFW posts. 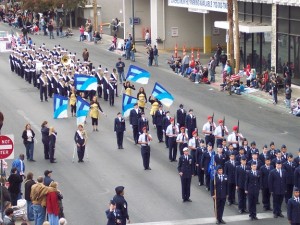