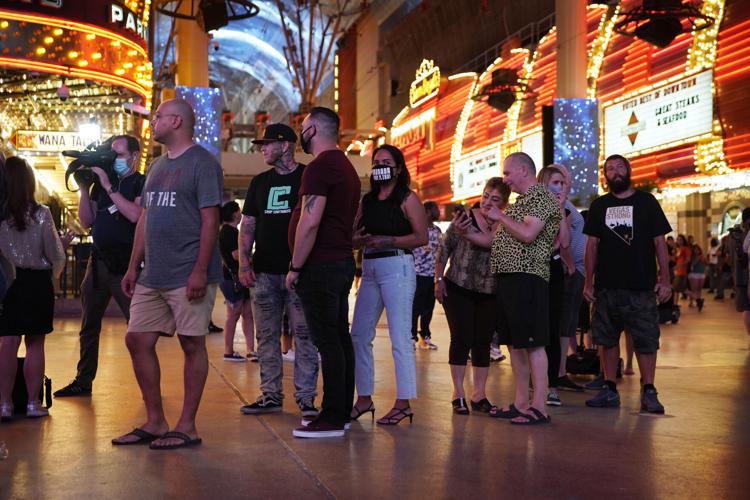 People wait in line to enter after the reopening of the D Las Vegas hotel and casino Thursday, June 4, 2020, in Las Vegas. Casinos were allowed to reopen early Thursday after temporary closures as a precaution against the coronavirus.
AP Photo/John Locher

(Kimberly James) – Las Vegas is reaching out to workers and businesses operating remotely to encourage them to consider the city as their new home.

“There are tons of great neighborhoods full of parks and walking trails that are extremely affordable as compared to higher cost of living areas such as San Francisco and Seattle,” Zach Blankfeld, management analyst at Economic and Urban Development Department, told The Center Square.

Innovate Vegas, a campaign designed to recruit remote workers to the city, touts the benefits of a higher quality of life in Las Vegas. The campaign cites no state income tax, more affordable housing and less traffic congestion relative to many other major metro areas, 300-plus sunny days a year, a burgeoning professional sports scene, and, of course, downtown Las Vegas as a growing center of tech, according to Jace Radke, senior public information officer for the City of Las Vegas.

“Las Vegas offers an immense amount of opportunities to residents and businesses,” Jonas Peterson, president and CEO of Las Vegas Global Economic Alliance, told The Center Square. “There is no state income tax, affordable housing, a low regulatory environment, short commutes on average, and many experiences fit for everyone.”

Tech advances are another amenity that the city has to offer. Blankfeld said that Elon Musk’s Boring Tunnels are in the city’s convention center, and new projects are always in development.

One of the many outdoor features is Red Rock, and the city also offers great restaurants and shopping.

Blankfeld said the weather is just one feature that makes Vegas different from other metro areas.

“There are not many other major cities where you will get sunny days in the 70s during November,” Blankfeld said. “As far as tourism adjacent amenities, residents get access to world-class entertainment and dining establishments.”

For those who are commuting, the airport has more than 500 domestic and international flights, making it convenient to commute back to the office occasionally or travel for vacation.

“We believe in Vegas, here you can live, work, play, engage, and do anything,” Peterson said. “Las Vegas sets itself apart as the Entertainment Capital of the World that also offers incredibly affordable housing, allowing people to meet their financial goals.”