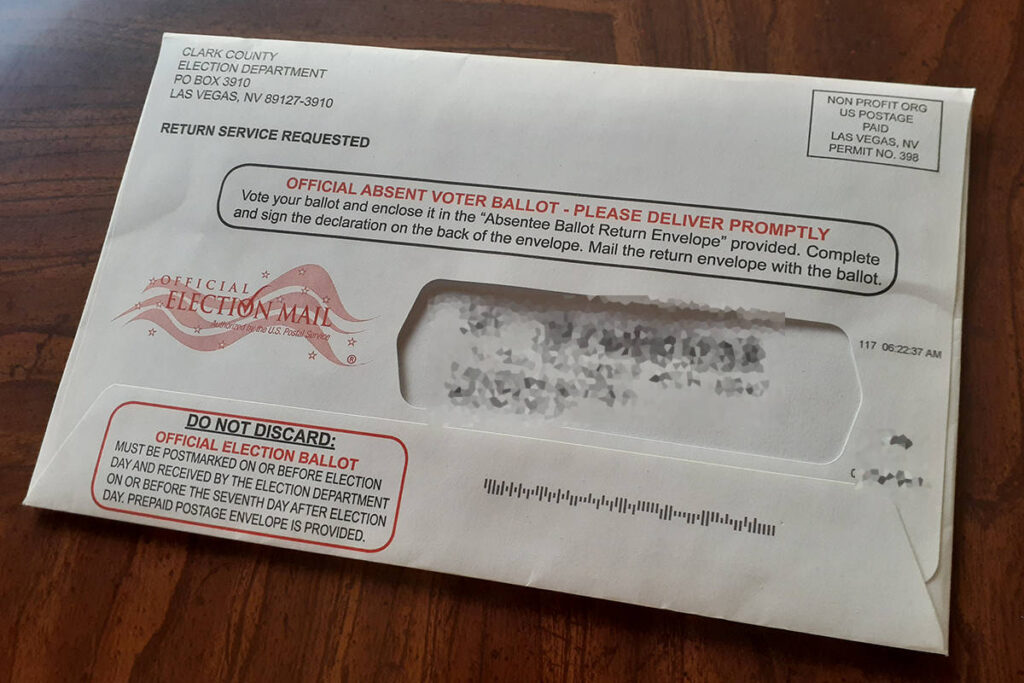 It’s about Nevada’s election system itself.

And all these investigations and court challenges are absolutely necessary to fix the very real flaws currently built into the balloting system – which are legitimately calling the current election into question – and fixing them before the next one.

And there are three main threats to election integrity that need to be exposed and neutralized before 2022.  They are…

The biggest problem with 2020’s universal mail-in balloting in Nevada wasn’t so much the fact that we automatically mailed ballots to people who didn’t request them – though that was, indeed, a problem.

The bigger problem was that ballots were mailed to people who never should have been mailed a ballot in the first place.

Before universal mail-in balloting, the problem of dead people voting was minimized.  Dead people tend not to request absentee ballots or show up at the polls in person.  But when you mail an actual ballot to a deceased person, you’re asking for trouble.

It’s like leaving a cookie out on the kitchen table in a house full of dogs while you go to work. The temptation is just too big…especially when it’s so unlikely that anyone will be caught, let alone prosecuted beyond a reasonable doubt.

The second problem is people moving without changing their address with the election department.

Indeed, NRS 293.1755 specifically requires that candidates “actually, as opposed to constructively, reside in the State, district, county, township or other area prescribed by law to which the office pertains.”

And that especially pertains to people don’t even live in the STATE – with the limited exceptions of military personnel, certain government workers, students, and individuals who are living and working elsewhere temporarily.

What we need now is clarification of the definition of “temporary.”

Lastly, and perhaps most importantly, people who have had their voting status changed from “active” to “inactive” shouldn’t automatically be mailed a ballot.  That’s another dog/cookie recipe for disaster.

The Clark County Registrar of Voters failed to observe this prohibition in the 2020 general election by mailing thousands of ballots to people whose ballots in the primary election were returned by the post office as undeliverable.

That doesn’t mean they can’t vote.  It just means the voter has to confirm their address and eligibility to vote before casting a ballot.

And again, that’s not “voter suppression.”  That’s just the rule.  A rule the Registrar failed to follow.

As a reminder, Nevadans have ALWAYS had the option to vote by mail, even before COVID hit.  They simply requested that an absentee ballot be mailed to them. In fact, 78,602 Nevadans voted by mail in the 2016 presidential election.

So there was no “safety” reason caused by COVID to justify mailing official ballots to every voter in the November election.  At best, the election departments could have and should have simply mailed an absentee ballot REQUEST to every voter and let the voter decide how they wanted to vote.

Instead, almost two million official ballots were mailed to a decidedly flawed list that included tens of thousands of voters who never should have been mailed a ballot in the first place.  As a result, 671,899 ballots were cast by mail in the 2020 election – almost a 10x increase over 2016.

And because so many ballots were mailed to bad addresses, the potential for illegally cast ballots exploded.  Which brings us to signature verification.

The only way to know if the legal voter actually cast their mail-in ballot is to compare the signature on the outside of the ballot envelope to the signature the election department has on file.  And that’s where the problems came in.

While Section 22 of AB4 allows county clerks to “authorize mail ballots to be processed and counted by electronic means,” only Clark County used a machine and computer software to do this.

Not coincidentally, almost all of the problems, questions and concerns about signature verification are coming out of Clark County.

So this issue MUST be addressed.

There’s a reason burglars prefer not to rob homes and businesses that have dogs.  Dogs make it harder to steal.

That’s why independent election observers – watchdogs, if you will – are CRITICAL to ensuring election integrity at both the ballot box and the counting room.

Not outside the building.  Or 60 feet away with a pair of binoculars.  Or even six feet away.

Whether signature verification is done by machine or human being – or some combination of both – independent observers must be allowed to look at the signatures being matched and object if they disagree with the matching decision by election workers.

Not AFTER the mail-in ballots have already been separated from the mail-in envelopes bearing the voter’s signature.

BEFORE the ballot is removed from the envelope.

If there’s nothing to hide, there’s no reason not to do this.  But if there IS something to hide, you can bet those trying to hide it will scream the loudest about allowing for true, meaningful observation.

Even the liberal Las Vegas Sun, in an editorial last week opposing a new election in the Clark County Commission District C race, acknowledged that “there were some iffy ballots found” in the original election and concluded: “Yes, there needs to be more scrutiny.”

One more to wrap up…

We DESPERATELY need a photo ID requirement for voting.

“My team is fighting vigorously on behalf of the President to restore legitimacy and trust in the results of this election and future ones. Systematic fraud, irregularities, and UNLAWFUL conduct erode confidence in our free and fair elections!! … If we allow elections in the future to be conducted as this election was conducted, we will lose our democracy—our representative democracy.”” – Rudy Giuliani