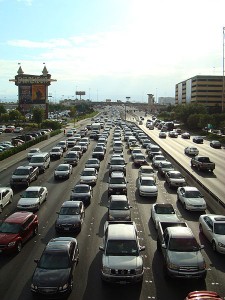 Uber and Lyft reproach on the imposition by the city of a new $50 semi-annual business licensing fee which will take effect on March. (Image Courtesy: Wikimedia Commons)

(Colton Lochhead, Las Vegas Review-Journal) – Las Vegas City Council approved, by a lopsided vote of 4-2, the $50 semi-business licensing fee for ride-hailing companies, such as Uber and Lyft. The charge shall be imposed for each “active driver” for a period of six months.

Uber and Lyft have already been imposed with business licensing fees by the state since its inception in Nevada last year. The city of Las Vegas has already imposed temporary business licenses over the companies in September, last year. The new $50 fee will start running on March, this year, by the time the temporary licenses expire and will go to the city’s general fund.

The ride-hailing companies brought comments against the said imposition saying it’s an additional burden on their part.

Lyft spokeswoman Chelsea Wilson said, “Rather than hit ride sharing with a duplicative tax, the City should encourage innovative new industries to grow.”