Lawmakers should not opt for presidential primaries instead of caucuses

(Thomas Mitchell) – Here we go again. Teeth are being gnashed. Hands are being wrung. People are whining about how unseemly, uncouth and un-American the very thought of a presidential caucus is compared to a nice aseptic primary.

Assembly Bill 302 would change the presidential caucuses of the two major parties to primaries in February, though why the Democrats need bother is another question entirely.

Senate Bill 421 would move all statewide primaries to the last Tuesday in February of even-numbered years, which would mean candidates would have to file a year before the General Election and make the general election season run from March through October. Hopefully, that is going nowhere fast. That is more politics than any of us could tolerate.

Republican state Sen. James Settelmeyer of Minden, a co-sponsor of SB421, has been quoted as saying his constituents “didn’t feel they had the ability to speak freely or felt intimidated by the (caucus) process,” and that voting “is a private thing, and I don’t believe the caucus is private.”

Unlike primaries, in which people show up sometime during the day and take a few minutes to step behind the veil of a voting machine, caucuses typically take place on Saturday and can involve hours of breaking up into precinct meetings, debating candidate qualification and voting by a show of hands or some other public expression of support. 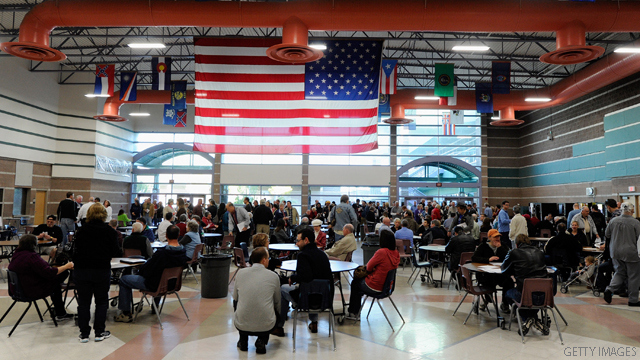 Frankly, political parties should nominate their candidates by whatever means they choose without interference from the state or funding by the taxpayers. By the way, the Australian, or secret, ballot was not widely used in this country until the late 1800s.

After the Nevada Republican presidential caucuses in 2012, it was widely reported that it wasn’t exactly a well-oiled machine. There were long delays, breakdowns in communication, misfires and miscues. One person tweeted: “GOP organization — an oxymoron.”

At the time, people complained that they actually were required to publicly vote and actually talk to other human beings about politics. You’d think they’d been required to mud wrestle each other.

Back in 2008 Democrat Dina Titus, now in Congress, promised to introduce a bill to change from presidential caucuses to primaries in Nevada. “This notion of neighbors getting together with neighbors to talk about politics, that’s just not Nevada,” she said. “What I found in my caucus is that the meeting didn’t lead to collaboration, cooperation and a good discussion. It led to hostility. It’s too complicated.” And she was a professor of political science — another oxymoron.

Columbia School of Law professor and election law expert Nathaniel Persily once observed, “The move toward primaries has transferred power away from political parties to the media, who are then in a position to describe someone as having momentum.” We agree.

In fact, current state law has the two major parties permanently ensconced, conducting primaries for them and paying costs and dictating when they will occur, while other minor parties must fend for themselves in conventions or caucuses to select their candidates. The Democrats and the Republicans should do the same. Perhaps, with real competition one of them might be overtaken by one of those minor parties.

Maybe we should bring back smoke-filled rooms with ward heelers arm wrestling and cajoling and making deals. Maybe then we would get candidates who stand for principles instead of hollow platitudes and slogans appealing to the widest possible range of slack-jawed dullards too simple minded to express an opinion in public and actually have to defend it.

Actually, we sometimes think Thomas Jefferson had the right idea: “I am not a Federalist, because I never submitted the whole system of my opinions to the creed of any party of men whatever in religion, in philosophy, in politics, or in anything else where I was capable of thinking for myself. Such an addiction is the last degradation of a free and moral agent. If I could not go to heaven but with a party, I would not go there at all.”

The state should remove itself as far as possible from the conduct of all political parties, major or minor.