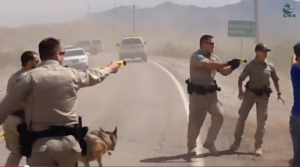 (NN&V Staff) – A group of Nevada legislators, led by Assemblyman Jim Wheeler (R-Assembly District 39), have sent a letter to the Legislative Interim Committee on Public Lands and Attorney General Catherine Cortez-Masto asking for an investigation into the circumstances surrounding the situation at the Bundy Ranch.

“There is clearly a dispute over land use between Mr. Bundy and the BLM,” said Assemblyman Wheeler. “We’re not taking sides on that question as that is for the courts to decide, but we are very interested in how a dispute over land use turned into an armed confrontation. In our view, the BLM overreacted by addressing the situation with an armed incursion rather than pursuing normal administrative remedies. This placed Nevada citizens in danger unnecessarily, and we need to make sure that this never happens again.”

The letter requests that the Interim Committee on Public Lands and Attorney General Masto initiate an investigation into the events leading up to the standoff, and to identify those responsible for ordering an armed response. The letter also asks for recommendations for actions that the State of Nevada and the federal government can take to prevent similar situations in the future.

“This situation highlights the problem of excessive ownership of western lands by the federal government, and points out the need to bring more local input and control to the management of public lands in Nevada,” said Assemblyman John Ellison (R-Assembly District 33). “Whatever the merits of Mr. Bundy’s case or that of the BLM, the larger question of how public lands are managed needs to be addressed before another situation gets out of hand and Americans are in danger from another armed incursion.”