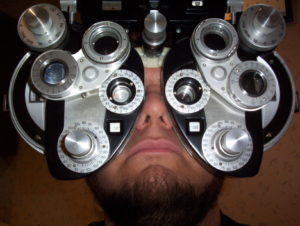 (By Chuck Muth) – It never ceases to amaze how many professional practitioners of the Dark Art of Political Spin think so much of their own genius – and so little of the rubes living in the heartland – that they honestly believe they can try selling ice to Eskimos and get away with it.

Indeed, in complying with the truth-in-labeling laws of this land, a more accurate name for this bill would be “The Optometrist Profit Protection Act of 2016.”

At issue is the fact that optometrists are the only medical professionals who are allowed to not only issue a prescription, but to fill it – at a significant profit.  Specifically, prescriptions for contact lenses.

According to the Charlotte Observer, the victim in the incident, Keith Lamont Scott, was carrying a loaded handgun which he bought from a man who stole it during a residential home robbery.

Exactly how would a background check have prevented this gun sale, hmm?  Does anyone who is not a complete moron actually think the guy who stole the gun was going to require Scott to undergo a background check before selling him the stolen weapon?

Republican congressional candidate Danny Tarkanian has challenged his Democrat opponent, Jacky Rosen, to a debate on the Nevada Newsmakersprogram.

The show is hosted by Sam Shad and longtime Nevada reporter Ray Hagarand is televised statewide.

But Rosen has chickened out, with her campaign flak calling it a “sham” since Shad and Hagar live in Reno – even though the show airs in southern Nevada and would be conducted at NBC/Channel 3’s studio in Las Vegas.

Shad and Hagar have objectively hosted numerous debates for southern, northern and rural races over many years.  The notion that because they live in Reno means they can’t moderate a congressional debate for a Las Vegas race is absurd.

Also, now that Mitch Fox and Nevada Week and Review are no longer on the air, Nevada Newsmakers is the only statewide, 30-minute public affairs program out there.

There’s simply no reason whatsoever for Rosen to duck this debate…other than being afraid of a debate in which the moderators aren’t automatically already in her corner.  Very Hillaryesque.

“The birther issue was raised and Benghazi was not?  The birther issue didn’t result in four dead Americans.  So for that not to have come up is unbelievable.” – Retired Lt. Gen. Michael Flynn on NBC moderator Lester Holt’s biased, pro-Hillary debate questions