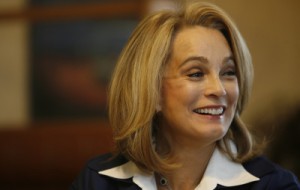 (NN&V Staff) – Former Nevada State Sen. Sue Lowden announced today that she will be filing paperwork this week with the Secretary of State to create an official campaign committee LLC as she considers running for the office of lieutenant governor in 2014.

“My experience both as an elected legislator and a private businesswoman means Nevadans would get someone who understands how government policies often hurt businesses and discourages job creation, as well as how to work within the legislative process in order to make necessary changes,” Lowden said.

“Truthfully, I wouldn’t need much on-the-job training because I’ve already been on the job for many years.”

Lowden commended incumbent Lt. Gov. Brian Krolicki, who will be term-limited out of office next year, and added that she expects to continue pursuing many of the projects initiated under his leadership.

“Brian has been a terrific lieutenant governor,” she said. “I look forward to working with him as he transitions to the next challenge in his political and professional life.”

A strong fiscal conservative with extensive business experience in gaming, banking and real estate, Lowden is uniquely qualified in the area of economic development. And as a former board member of Las Vegas Events, she has first-hand experience in bringing events to Nevada that will boost tourism, generate additional tax revenue without raising taxes, and create jobs for many Nevadans who are still unemployed and underemployed.

Lowden also announced that Las Vegas City Councilman Bob Beers, who has also been considering the lieutenant governor’s race, has agreed to serve on her campaign committee’s LLC board.

“Bob and I are good friends and have spoken at length about this race,” Lowden concluded. “His decision is that if I run, he won’t. I couldn’t ask for a stronger endorsement than that.”

“And as for those who think I might be afraid of taking on another tough primary race, let me assure you that I’m no chicken…pun intended.”