Lucius Beebe and the Cobb Family in Virginia City

(Tyrus Cobb) – It had to be one of the most unusual pairings, even for eclectic Virginia City, long noted for its odd ball characters! 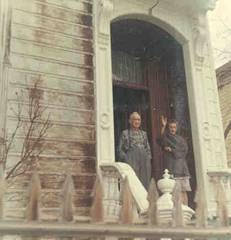 Will and Eva on their porch.

My grandparents, Will and Eva Cobb, bought an old Victorian on A Street above the historic courthouse in the 1930’s, paying a grand total of $300 for the house during the depression era of the 1930’s.  As I recall, they paid the house off in 3, $100 installments.  The house next door on the corner of A and Union streets, just up above and a few feet south of the historic Piper’s Opera House, was a rundown Victorian style house belonging to a punch drunk prize fighter from Australia, named Dan Connors. 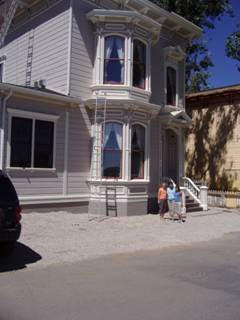 The house today, now a B&B known as the Cobb Mansion. The Piper/Beebe Clegg House is in the background.

Over the years, granddad Will served as Storey County sheriff and represented the County in the Legislature, both as an Assemblyman and as a Senator.  That was a time when each of Nevada’s 17 counties had one Senator, and he wound up as an important player because the line up in the state Senate in the 1940’s was 8 Republicans and 8 Democrats, and one feisty, sometimes Independent, sometimes Democrat, Will Cobb, from the Comstock.

Early on, Will also drove the V&T “stage”—every day!—from Virginia City down the old, steep Geiger Grade to Reno, then up the rugged dirt Clear Creek trail to Glenbrook—and back! Brother Bill sent these photos of the stagecoach Granddad drove. 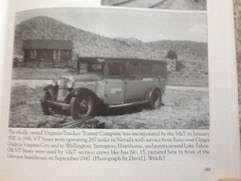 Will had a tough upbringing — following the death of his father, his mother, now destitute, was forced to place him in an orphanage in Nevada City, CA. He didn’t take a liking to that and walked all the way back to Virginia City at the age of 10.  He grew up primarily in Dayton as his mother tried everything to get by.  My grandmother, Eva, was one of the eight children in the Richard and Jeanette Harris family, who lived in a small house on D Street with dirt floors.  Somehow, this unlikely pair wound up together and married in 1913.  They had one son that they were also going to name Will, but that was in 1915 at the height of the ball player’s fame, Tyrus Raymond Cobb!  So dad was named after the Georgia Peach, as Tyrus Richard Cobb.

I remember my grandparents’ yard as being eclectic to say the least.  There was a 1917 Model T, which granddad had on a stand with one wheel off and a belt attached to it to run his saw.  Whenever granddad wanted to cut wood, he would set the advance on the Model T and crank it up; the belt would run the saw and the wood was splintered.  There was also a 1931-Chevrolet truck in the yard that was formerly a Shoshone Coca-Cola delivery vehicle, which granddad had christened “Ann-Teek”, and there was a 1941-Chevrolet sedan in the garage. Granddad once drove the Coca-Cola truck down to Carson City to ride in the Nevada Day parade, with brother Bill and friends aboard.

The house next door was in very bad shape, and the yard, such as it was, even worse — nothing really but a dirt hillside. But then, in the late 1940’s, who purchased the Conner’s home but Lucius Beebe and Charles Clegg, two gay bon vivants from New York City!  As historian, Michael Grace described Lucius Beebe, he was the “image of celebrity.  An author, journalist, historian, raconteur, gourmand, and bon vivant extraordinaire — this extraordinary personality was one of the first gay men to have an openly public relationship”.

A columnist for the New York Herald Tribune in the 30’s and 40’s, Beebe was always elegantly dressed and led a very decadent life.  Indeed, he coined the term “cafe society.”  He was the author of a column “with almost staggering snobbishness and peculiar charm.  His interests were people who did things, individuals with flash, not the leftover society types from the turn of the last century,” said Grace.  Beebe’s columns, which related the adventures of the denizens of what he coined as “cafe society,” were read by thousands.  He was a champion of the noon time martini; for dinner, he would dine at the “Colony Club,” “21,” or the “Stork Club,” with bottles of Dom Perignon as his favorite drink.

In 1940, Beebe came to Nevada to review the premier of a film, Virginia City, starring Errol Flynn.  Beebe saw the movie at the historic Piper’s Opera House and although he panned the film, he was taken with the historic mining town.  That was the same year that he met and fell in love with Charles Clegg, interestingly, at the home of Evalyn Walsh McLean, owner of the fabled Hope Diamond.  The homosexual relationship Beebe and Clegg shared was relatively open and well known.  Charles, an athletic young man, joined the Navy in World War II, but their relationship continued.

In 1949, according to Grace, “Beebe, tired of the social world he had literally invented in New York, moved with Clegg into the old Piper’s Mansion in far away Virginia City” (it was Connors house then, but it was originally owned by the famous Piper family).  Beebe and Clegg revived the moribund newspaper, the Territorial Enterprise, where Mark Twain once wrote.  The paper eventually had over 6,000 subscribers and became one of the most prestigious weeklies in the nation.  The newspaper was notoriously pro-prostitution, pro-alcohol, and ferociously anti-progress, anti-union and anti-diet.  Beebe even fought efforts to move a brothel away from a school, with the slogan “don’t move the girls, move the school.”

In contrast to my grandparents’ yard with the Coca-Cola delivery truck and the Model T, Beebe and Clegg owned three Rolls Royce’s and traveled the country in their private railroad cars, the Gold Coast and The Virginia City. 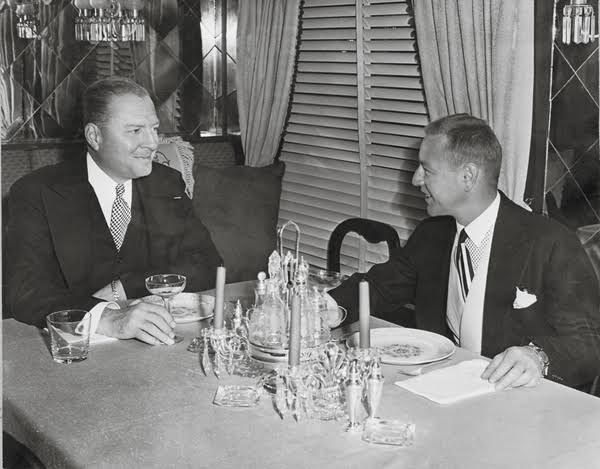 Lucius Beebe and Charles Clegg pose in their private car, the Gold Coast, which is now on display at the California State Railroad Museum.

They had a 200-pound St. Bernard, named T-Bone Towser, given that was all the pampered dog ate.  The relationship between my grandparents and Beebe and Clegg was cordial, but they were hardly friends, given their widely disparate backgrounds.  Although granddad Will never said anything that I heard, he was clearly not a fan of the Beebe-Clegg homosexual relationship or their elegant and prolific lifestyle.

It might seem that the “odd couple” two gay guys from New York high society might not fit in up on the Comstock, but as my sister Patricia recalls, they did. Both Beebe and Clegg were regulars at all the usual haunts, like the “Bucket of Blood,” the “Delta,” or the “Sazarac.” They became part and parcel of the town, not outsiders but very much integrated into daily community life.

Below is a photo of Lucius Beebe with my grandparents. 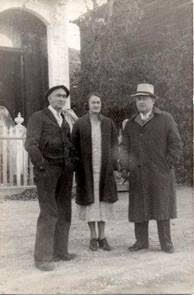 Beebe and Clegg sold the Territorial Enterprise and moved to San Francisco in 1960, where Beebe continued to write a column for the San Francisco Chronicle — and some 35 books!

And so there is the story of the New York society, very wealthy, bon vivants next door to my grandparents, who endured a very hard scrabble background, but made their own mark in Nevada politics and on the Comstock Lode.

But, it sure as hell was a contrast in lifestyles!