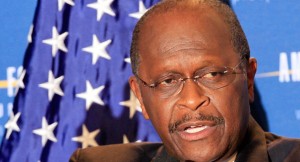 (Alan Stock) – Herman Cain has suspended his quest to become the 2012 Republican Presidential nominee. His campaign was damaged for a few reasons. Seemingly it was the various sexually-oriented accusations that hurt him the most. There were, however, other factors.

When the first three women came forward with allegations that he had sexually harassed or groped them when he was the president of the National Restaurant Association in the 1990s, he was slow to respond. When Ginger White claimed to have had a thirteen-year affair with Cain, he was much quicker to respond.

But by this time, the main stream media had already been consumed with their feeding frenzy. When they got a hold of the first sniff of the first accusation, they latched onto the story with teeth as fierce as a pit bull fighting for its life and they never let go.

Cain might have been able to overcome the sexual harassment charges even though settlements had been paid to two of the accusers. But when Ginger White came out with her claim, Cain admitted that he had known her as a friend and did in fact pay her various sums of money “to help support a friend.”

He, also, admitted that his wife knew neither about his thirteen-year friendship nor the various payments. At that point, a lot of people who had been supporting him began to scratch their heads and wonder just what the truth was and what the truth was not.

Cain suffered from other distractions as well. Everyone knew about his business acumen. But when it came to explaining his views about U.S. policy toward Libya and other foreign policy issues, he fell short. It turned out he was the incomplete candidate.

Another issue to be addressed was how the mainstream media went after Cain and how they treat conservative candidates in general. While the media did go after Anthony Weiner when he was caught with his undershorts bulging, Bill Clinton seemed to get a pass during the Monica Lewinsky scandal. Everyone has got to remember the media chant that after all these were two consenting adults, it’s an issue between Bill and Hillary and when it comes down to it, it really is none of our business. The mainstream media does not give that kind of pass to a conservative, no matter how you cut it.

Many people have asked me as to why conservative candidates would debate on networks that are known to have an open hostility to conservatives…networks such as MSNBC. The answer is that these Republican candidates for president are seeking all the (free) publicity they can get, and they get it by debating each other in various venues and in various forums.

At the same time, they leave themselves open to obvious hostile questions and follow-ups. It is only Newt Gingrich who has been bold enough to go after the mainstream media and the moderators who have tried to foment hostility among the presidential candidates.

So the attitude is that “we’ll show these ungrateful blacks what it’s like being in the wilderness” of media acceptance. Conservative minorities (read black, Latino, Jewish, etc.) will never be accepted by the mainstream media because the mainstream media is unabashedly left of center. They should forget trying to gain mainstream liberal acceptance, and conservatives should forget about debating in a forum that is skewed against them even before the first word of a debate has been spoken.

Take today’s poll: Do you think the appointment of Harry Reid’s son as the Henderson City Attorney was the right choice for the City?