Man from Nevada on hot seat over Burning Man demands 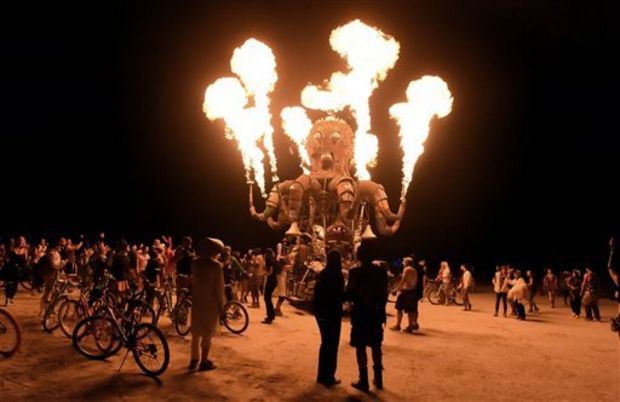 Photo of a burning man

(Thomas Mitchell) – So, how do you think this is going to turnout?

The head of the Bureau of Land Management is Neil Kornze, a native of Elko and former policy advisor to Harry Reid, who managed to have the 35-year-old confirmed by the Senate 71-28 shortly before the bungled standoff with Bunkerville rancher Cliven Bundy.

Now Kornze’s agency is demanding expensive pampering from the organizers of the Burning Man festival in Black Rock Desert. The Reno newspaper reports that the BLM is demanding that the festival organizers build a $1 million luxury facility replete with trailers, flush toilets, washers and dryers and vanity mirrors for the comfort of BLM executives and agents and unspecified VIPs. Festival organizers say the cost of permits and complying with BLM demands have risen from $1 million in 2011 to nearly $5 million this year.

This year’s eclectic event — described as celebration of art, music and free expression, whatever that means — is scheduled to take place between August 30 and September 7. It annually attracts about 70,000 people and generates about $35 million for the local economy.

In addition, the Reno paper says emails it has received spell out a demand that the facility be stocked with hot-and-cold running desserts and a 24-hour full-service kitchen providing a potentate’s menu of gourmet meals and snacks that include (we kid you not) 10-ounce steaks, 18-ounce pork ribs, poultry, ham, fish, vegetables, potatoes, bread, salad bar with five toppings and three dressings and desserts.

Kirnze’s old boss Harry has sent a letter to his new boss, Secretary of the Interior Sally Jewell, critical of the BLM demands.

“I care strongly about the environment in the Black Rock Desert and was glad to author the legislation that created the Black Rock Desert-High Rock Canyon-Emigrant Trails National Conservation Area where Burning Man is held,” Reid wrote. “While I agree that the BLM should take its permitting duties seriously and work with Burning Man to both guarantee the safety of its participants and the protection of the environment, providing outlandishly unnecessary facilities for the BLM and its guests should be beyond the scope of the permitting requirements. Part of Burning Man’s philosophy is self-reliance and living with the elements is part of the experience. Flush toilets and laundry facilities can be found about ten miles away in Gerlach, Nevada, if BLM’s employees need such amenities.”

The Reno Gazette-Journal reports that Nevada’s other senator, Dean Heller, spoke with Kornze this week and called the demands “a bit over the top.”

BLM Deputy Director Steve Ellis issued a statement saying the agency need to assure employee health and safety, sanitation and environmental compliance but he was concerned about cost of the agency requests.

We suspect Kornze will find a way to tone down the agency demands.

A version of this column also runs on Mr. Mitchell’s blog.