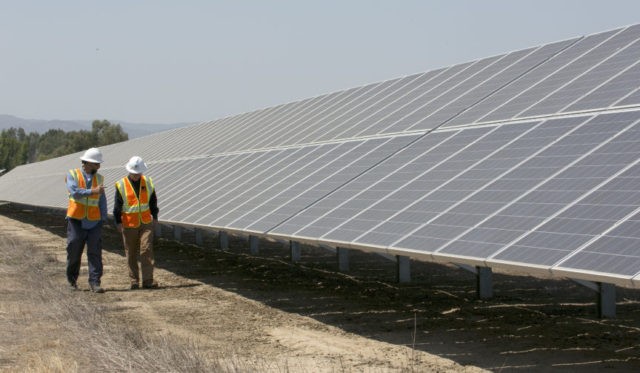 If you heard that a Chinese company, controlled by a hedge fund, based in an offshore tax haven, had teamed up with a German company funded by a Qatari wealth fund, the same people behind Al-Jeezera, the Islamic propaganda wing, in order to file a petition at the International Trade Commission (ITC), would you believe their motivation is to help the American factory worker?

That is exactly what SolarWorld and Suniva are doing as these two foreign owned entities have joined together to petition the ITC to impose tariff protections for their products on the rest of the world.

The tariffs requested by these two failed companies and their global capital backers would double the price of solar panels. More than 1000 American companies in the Solar Energy Industries Association are opposed. The two foreign solar companies survived for years only because they received subsidies and protection from Obama and now they want tariffs in order to pay off German cronies of Angela Merkel and their Islamic financiers.

Consider who’s in favor of these tariffs:

Solar World is a German company run by Jurgen Stein and owned by Frank Asbeck, a crony and frequent travel companion of German chancellor Angela Merkel.  Their most prominent investor is the Qatar Foundation, an entity of the Qatari royal family which remains funded by the government of Qatar and would ultimately receive a payout should Solar World win this case before the ITC.  The Qatari government also funds the Islamic propaganda broadcaster Al-Jazeera.

Suniva is the other company asking for tariffs.  They are Chinese-owned but controlled by a hedge fund domiciled in offshore tax haven Guernsey.  They paid a lobbyist married to Hillary Clinton’s former chief of staff to get them $48 million in federal taxpayer subsidiesunder Obama, all while using prison labor in their factory.  Then, when they went bankrupt anyway, their New York operative, Jeremiah Silkowski, wrote a letter to the Chinese offering to liquidate the Suniva plant, lay off their workers, and drop the trade case in exchange for a $55 million payoff.

These two companies are the quintessential example of how global financial interests manipulate the DC swamp to fleece the taxpayer and sell out the American factory worker.

In this case, it is the American factories that are opposed to tariffs.  Solar manufacturing jobs have grown 58 percent in the last five years and those are largely concentrated in factories in the Midwest and Deep South that make steel racking and other metal equipment using American steel.  From Youngstown, Ohio to Huntington, West Virginia and down to Muscle Shoals, Alabama, there are over 50 factories producing steel equipment for the solar industry, and none of them received federal subsidies or protection.  They’ve been succeeding all on their own.

But the globalists’ trade principles are clear: when tariffs hurt foreign companies, they’re bad; when tariffs give cash to the foreign friends of Obama, Hillary, and Merkel, all of a sudden they’re just fine.  The globalists just don’t care if the American factory worker in the Midwest loses his job, so long as the foreigners don’t lose anything.

President Trump made a strong commitment to defend American companies but, in this case, the global financial interests behind two failed foreign companies are trying to get a bailout on their bad investment by manipulating U.S. trade laws for their benefit and hurting many successful American companies in the process.  President Trump shouldn’t be fooled by this three-card monte of foreign financial capital – the Germans, and Qataris, and offshore hedge funds are trying to pull one over on him.   President Trump needs to back the factory workers of Ohio, Indiana, West Virginia, North Carolina and Alabama, and say no to tariff bailouts for foreign owned solar speculators.