(Ed Pearce, Kolo TV) – HAWTHORNE — The fallout from the Mineral County election debacle continues with a lawsuit raising questions about the reliability of the state’s electronic voting system and our election officials.

This much we know. There were 178 more votes cast in Mineral County in November 2014 than showed up in the final tally. Those missing votes have been traced to one machine used in early voting. 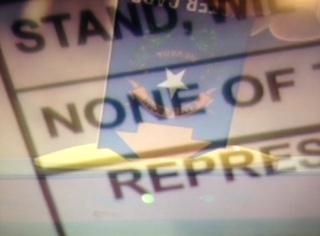 How that happened has never been explained, but a lawsuit filed by one of those losing candidates alleges, as we’ve reported, that when that discrepancy was noted, former County Clerk Cherrie George was directed by the Secretary of State’s office to correct the voter turnout numbers to match the votes tallied.

The Secretary of State’s office signed off on that report and sent the final canvass to the state Supreme Court.

“They got certified as the voting results when everybody knew they were falsified,” says Reno attorney Ken McKenna, who filed the lawsuit on behalf of Chris Nepper, who lost his race for county clerk by a margin within those 178 votes.

“That’s voter fraud,” says McKenna. “Was that for their own self interest to assure the public? Was that on the benefit of the company (Dominion Voting Systems) so they don’t lose their contract? Why would you intentionally certify records that you know are the results of a malfunctioning machine?”

And with the malfunction still unexplained, McKenna says the implications go far beyond the concerns of his client, who is one of the three losing candidates, or the voters of Mineral County.

The Dominion Voting System, using electronic machines backed up by a paper record, was adopted statewide more than a decade ago.

So, the issues raised in Mineral County, he says, are something that should concern every Nevada voter.

“We have no way to believe that it won’t happen again. We don’t know if it’s happened in other counties and just hasn’t been caught. We don’t know what the reliability of these machines is now. They are highly in question.”

His lawsuit asks for a new election, a tall order, he admits, but then this is uncharted territory.

“A fraud was committed on our Supreme Court. Should they take legal action against the individuals in state government who did this? Has a crime been committed? This is a very, very serious matter.”

His lawsuit names the Secretary of State, the Attorney General and Dominion Voting Systems.

We asked for responses from all three and received none.

A final twist to this story: McKenna’s client is Chris Nepper, who lost the race for county clerk. He originally sought legal action to determine if the result was accurate.

The person he lost to has recently resigned for personal reasons and Nepper was appointed to the job.

He told us he proceeded with the lawsuit anyway because he felt finding the answers was an important step in restoring faith in the voting system. It will be his job to oversee that system in the next election.