Mitchell: Assembly bill would dilute the voting power of Nevadans

(Thomas Mitchell, 4TH ST8) – There is a bill pending in the Legislature that would — and we are not making this up — dilute the voting power of every Nevadan in presidential elections.

A passel of Democrats have hatched Assembly Bill 274 that would rope Nevada into the conspiracy to subvert the Constitution and deny the wisdom of the Founders by joining an “Agreement Among the States to Elect the President by National Popular Vote.” The change would take place when enough states join to constitute a majority of electoral votes.

The bill is to go before the Assembly Committee on Legislative Operations and Elections at 1:30 p.m. today.

Currently the president and vice president team that wins the majority of votes in Nevada gets the state’s six electoral votes, one for each representative and senator in Congress. AB274 would have those six votes go to whoever wins the national popular vote. This essentially cuts Nevada’s votes from six to four, since the votes nationwide would be proportional to population and exclude the power of our two senators.

Why would any sane person want to do that and let California and New York elect every president?

Yes, Hillary Clinton won more popular votes than Donald Trump, but he won more state electors, which is what the Founders envisioned, because ours is a federalist system, not a democracy. The Electoral College provides more power to the states. (Trump won the Electoral College vote by 304 to 227. Clinton won the popular vote by 2.9 million. She won California by 4 million votes. So Trump won the combined popular vote in the 49 other states. What about that California secession movement?)

“I believe that focusing on the Electoral College is important no matter how you do it, because what’s happened this decade, these last several elections, where we have clearly two elections, the Gore election and this election. In this election Hillary Clinton will wind up getting almost 3 million votes more than Trump. It’s time the system goes away. It is very undemocratic,” Reid said in an interview. “And we have a number of states that have taken care of this. It doesn’t have to be done with a constitutional amendment. And I think people should join together and get rid of this. It is unfair that presidential elections are focused on seven states. It’s wrong.”

Pay no attention to the fact Reid served in the Senate for 30 years, where each state gets two votes no matter the size of its population. Most undemocratic. 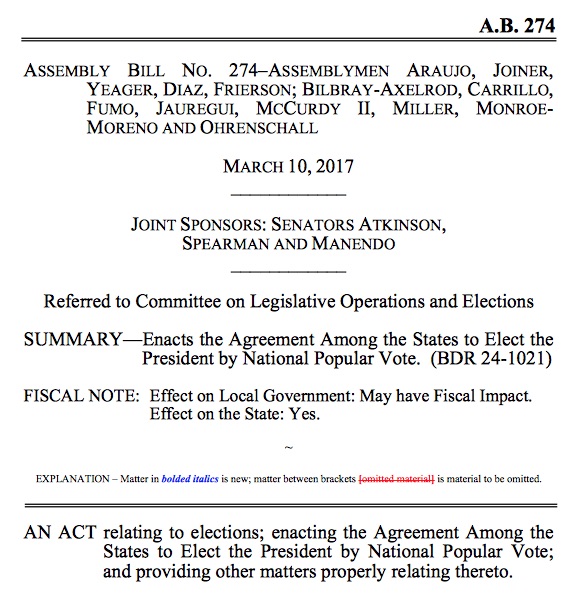