Mitchell: Congress should slow the slide down ObamaCare’s slippery slope 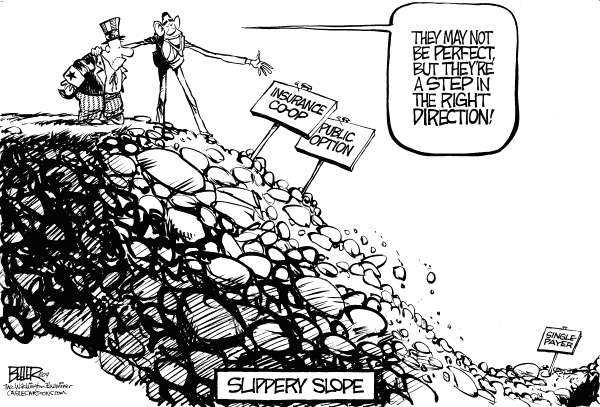 (Thomas Mitchell, 4TH ST8) – Darn you, Charles Krauthammer. Why do you have to write what I was going to write just before I write and say it so much better than I ever would?

The Lord giveth and the Lord taketh away, but for governments it’s not that easy. Once something is given — say, health insurance coverage to 20 million Americans — you take it away at your peril. This is true for any government benefit, but especially for health care. There’s a reason not one Western democracy with some system of national health care has ever abolished it.

I’ve already protested that RyanCare contains too many of the market manipulating machinations of ObamaCare, lamented the efforts to make sure no one ever has any handout taken away.

But I’m getting hoarse from screaming at the TV and printed page over the reporting that millions will “lose” health insurance cover, when in reality many of those millions will be gladly “throwing” away that pathetic and nearly useless coverage due to sky high deductibles. (Never mind that the CBO estimates of the uninsured under RyanCare are probably just as inflated as its estimate of the newly insured under ObamaCare.) And just what were those able-bodied millions added to Medicaid doing before the Democrats charity?

But, as the astute Krauthammer notes:

There is no free lunch. GOP hard-liners must accept that Americans have become accustomed to some new health-care benefits, just as moderates have to brace themselves for stories about the inevitable losers in any reform. That’s the political price for fulfilling the seven-year promise of repealing and replacing Obamacare.

Retrenching is better than leaving ObamaCare in place and letting it evolve in the single payer system Obama and Harry Reid wanted to begin with.

Reid, asked on public radio a couple of years ago if the country will eventually work beyond private health insurance, Reid enthusiastically replied, “Yes. Absolutely, yes.”

He was later quoted by the Las Vegas Sun insert in a rare local article: “What we’ve done with Obamacare is have a step in the right direction, but we’re far from having something that’s going to work forever. We had a real good run at the public option … don’t think we didn’t have a tremendous number of people who wanted a single-payer system,” but he could not get enough votes back then.

As Krauthammer points out, once that happens there will be no going back: “There’s a reason not one Western democracy with some system of national health care has ever abolished it.”