(Thomas Mitchell, 4TH ST8) – What an incredible, pointless waste of time and money!

Democratic state Sen. Richard “Tick” Segerblom, who never misses a chance to stroke the far left wing of his party, has introduced a bill — we are not making this up — to change Columbus Day to Indigenous Peoples Day. It is Senate Bill 105.

Columbus Day is not a holiday, but there is a law on the books that states: “The Governor of this State is authorized and requested to issue annually a proclamation designating the second Monday in October as ‘Columbus Day’ in commemoration of the arrival of Cristoforo Columbo in the New World.”

Segerblom would replace this with: “The Governor is authorized and requested to annually proclaim the second Monday in October as ‘Indigenous Peoples Day’ to celebrate the thriving culture and significant value that Indigenous people add to the State of Nevada and the United States of America.”

The Las Vegas newspaper account tells us: “Segerblom said the bill recognizes the millions of Native Americans who died in conflicts when European settlers moved into the country and claimed land as their own, and shows an appreciation for their contributions to society.”

The unbiased and balanced account goes on to inform its readers that Columbus is “credited with ‘discovering’ the Americas. But historians have debunked that as myth, saying he sailed around the Caribbean but never came to North America,” paying no heed to the fact the Caribbean islands are part of North America and the fact he did land in South America, both part of the so-called New World.

We are also informed that critics argue Columbus “engaged in brutal acts against native peoples,” without any reference to wars between tribes or attacks on those evil invading Europeans. Don’t they teach about the French and Indian War any more? Try reading a bit of history, including the accounts from late in the 19th century when the Plains Indians were actually successfully and brutally pushing back against encroachment.

These are the same Democrats who want to remove the statue of mid-20th century Democratic Sen. Pat McCarran from the U.S. Capitol because he was a racist during an era when the Democratic Party pushed segregationist laws and policies.

Erase history and change the present and the future? Rather Orwellian if you ask me?

Perhaps our idle lawmakers could change the name of Genoa since it is named after Columbus’ hometown in Italy.

The vote in the Senate Committee on Government Affairs to approve SB105 was 4-1. 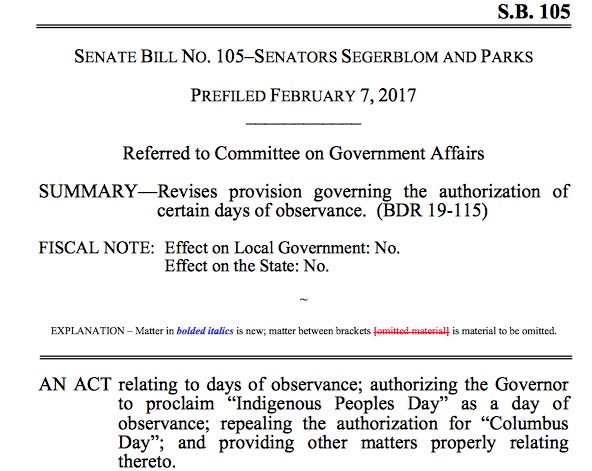 Apparently having the second Tuesday of February during each regular session of the Legislature designated as Nevada Tribes Legislative Day and recognizing the fourth Friday of September as Native American Day isn’t nearly enough.