Mitchell: Is the solar energy bubble about to burst?

Mitchell: Is the solar energy bubble about to burst?
N&V Staff 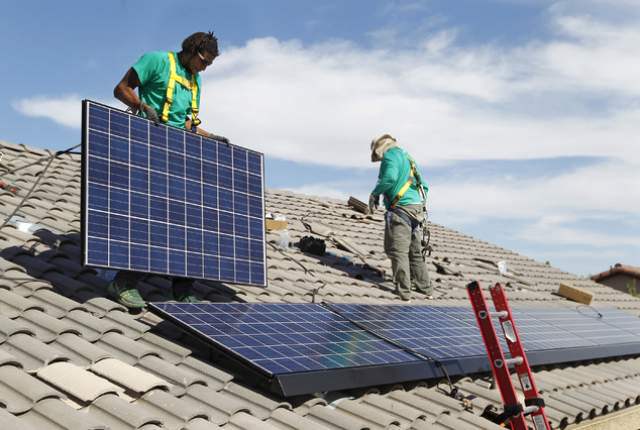 Today The Wall Street Journal has an editorial under the headline “Big Solar’s Subsidy Bubble: Companies cash in on tax credits and ‘net-metering’ schemes.”

It points out that solar panel installers are making a big push partly because panel prices have fallen but mostly because in December 2016 the federal 30 percent tax credit falls to 10 percent and numerous states, including Nevada are rethinking generous net-metering programs, which will make solar difficult to produce a return on investment.

Of particular concern are solar leasing companies, such as SolarCity, which got a $1.2 million taxpayer handout to open an office in Las Vegas and compete with existing taxpaying solar installers.

“Here’s how this dubious business works,” the editorial states. “Solar-leasing companies install rooftop systems (which often cost tens of thousands of dollars) at no upfront consumer cost. Homeowners rent the panels for 20 years at rates that typically escalate over time but are initially cheaper than power from the grid. Investors get to pocket the myriad state and federal subsidies while homeowners are promised hundreds of dollars annually in savings on their electric bills.”

The catch, according to WSJ, is that the teaser rates could increase if government subsidies are reduced.

Several members of Congress this past year asked the Federal Trade Commission to keep an eye on solar leasers who might be using “deceptive marketing strategies that overstate the savings” and “understating the risks.” (Never mind that solar leasing companies can put a lien on the house.)

NV Energy currently has a requested pending before the PUC that would cut the amount of credit for solar power uploaded to the grid from rooftop panels from 11.6 cents to 5.5 cents, a rate that could result in solar panel users paying more for electricity — when capital cost is included — than those without solar panels.

The WSJ editorial concludes with this pithy remark: “What does it say that the President is using his bully pulpit to abet an industry that is essentially fleecing the American public?”