Mitchell: Revamped newspaper targets a favorite target of its owner 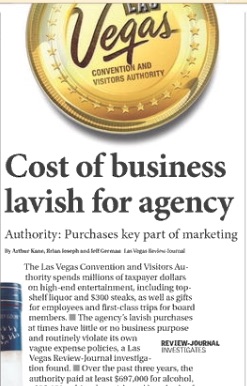 (Thomas Mitchell, 4TH ST8) – On the same day, the editor-in-chief of the Las Vegas newspaper takes to the front page to tout changes being made at the paper — changes that were already touted for a week on the front pages — the big investigative piece on the same front page was about lavish spending by the Las Vegas Convention and Visitors Authority.

While the headline on the editor’s piece touted “We’ve changed for the better,” that investigative piece suggested something else entirely. You see the owner of the paper is casino mogul Sheldon Adelson who also owns the Sands Expo Center.

In 1999, Adelson sued the LVCVA, saying the convention authority and a group of trade shows was in a “conspiracy to steal business from me.”

Adelson said plans to expand the convention center was unfair competition with his Sands Expo because LVCVA was offering discounted rates.

“Their predatory pricing behavior is against the law, as is tortious interference,” Adelson told the Las Vegas Sun at the time. “You’re not supposed to go after someone else’s customers. There are legal remedies for people who try to destroy business relationships. The LVCVA has conspired with one or more show managers to achieve the result of taking away our business. Trust me, I know this. The convention authority drafted the terms of the expansion and had proxies solicit the consortium members for them. And when we sue the people involved, everyone will run for cover and tell the truth.”

The suit was settled a year later.

When the LVCVA started talking about expanding again this past year, some suspect Adelson floated the idea of using room tax money for a football stadium for the Oakland Raiders as a way of funneling funds away from that expansion.

He went on to say, “No shows are going to leave Las Vegas for another city. I’ve personally spoken to organizers, including the ones referenced by the LVCVA, and only one said his show could fit in another city — but he had no intention of even considering that. … Additionally, the likelihood of attracting new shows remains extremely unlikely. Many of the shows the LVCVA has targeted to bring to Las Vegas want to come during times early in the year when all of the hotel rooms in town are already booked with existing conventions.”

When the Nevada Policy Research Institute wrote about lavish spending by the LVCVA in 2007 it was criticized because Adelson was a contributor.