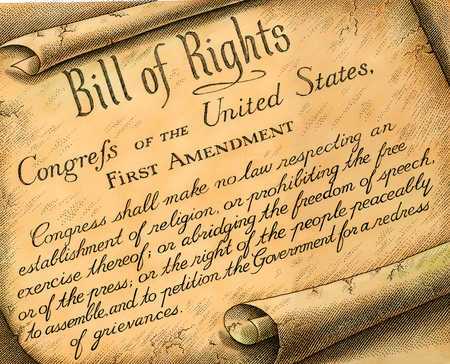 (Thomas Mitchell, 4TH ST8) – Nevada’s freshman U.S. Sen. Catherine Cortez Masto has uncovered a new right in the penumbra of the Constitution. In an email sent out this morning, the senator is seeking support for a constitutional amendment that would reverse the 2010 Supreme Court decision known as Citizens United v. FEC, which said individuals, nonprofits, corporations, unions and other organizations have the right to spend money at any time to express their political opinions under the First Amendment.

Cortez Masto’s email seeks support for a constitutional amendment — called Democracy for All — that would allow Congress and the states to restrict how much money anyone may spend to support candidates or election issues.

In bold-faced type, the email declares:

“Citizens United defies the very principle on which our country was founded: that every person has an equal say in our democracy.”

Never mind that at the time of the Founding, the “say” that constituted the right to vote was reserved for only those who owned property and black males could not vote until after the Civil War and women not until the 20th century. But what’s a little revisionist history when you are begging for contributions so you can spend money to create a constitutional amendment to limit how much money others may spend?

It also sounds like the senator has an ax to grind:

We all remember the disgusting amount of money right-wing groups, like those in the Koch brothers’ network, spent to defeat me in our race for the Senate: over $70 MILLION! And with the Koch network pledging to spend as much as $400 million this cycle, it’s high time we get dark money out of our election process. We cannot continue to allow the deep pockets of special interests to drown out the voices of the average American.

Apparently, she is referring to the part of the amendment that would allow lawmakers to “regulate” free speech, which is newspeak for forcing the disclosure of all donors to any given cause.

Actually, Citizens United did not overturn laws requiring disclosing of donors, as witness a dissent by Justice Clarence Thomas:

Now more than ever, (the law) will chill protected speech because — as California voters can attest—“the advent of the Internet” enables “prompt disclosure of expenditures,” which “provide[s]” political opponents “with the information needed” to intimidate and retaliate against their foes.  … Thus, “disclosure permits citizens … to react to the speech of [their political opponents] in a proper”—or undeniably improper —“way” long before a plaintiff could prevail on an as-applied challenge. …

I cannot endorse a view of the First Amendment that subjects citizens of this Nation to death threats, ruined careers, damaged or defaced property, or pre-emptive and threatening warning letters as the price for engaging in “core political speech, the ‘primary object of First Amendment protection.’ ” … Accordingly, I respectfully dissent from the Court’s judgment …

If we may be so bold as to remind those who attribute false precepts to the Founders, the Federalist and Anti-Federalist Papers were penned anonymously by men familiar with the anonymous works of Thomas Paine, John Locke, and Montesquieu.

The level of influence from billionaires and millionaires in our electoral system is unprecedented. And it’s ridiculous. We need to end the unlimited and dark contributions of big corporations and special interests if we’re going to have a democratic process and a government that will truly work for all Americans – not just the richest few. How big your bank account is should not permit you to have a louder voice in our democracy.

Thank you for joining me to help restore transparency and fairness to our democratic system.

Below this is a button one may click to contribute money, as well as a disclosure: “Paid for by Catherine Cortez Masto for Senate.” How would she like it if her speech were restricted?

The problem is that free speech is not free if the incumbent government satrapy can curtail its dissemination.

As a “restriction on the amount of money a person or group can spend on political communication during a campaign,” that statute “necessarily reduces the quantity of expression by restricting the number of issues discussed, the depth of their exploration, and the size of the audience reached.” … Were the Court to uphold these restrictions, the Government could repress speech by silencing certain voices at any of the various points in the speech process. (Government could repress speech by “attacking all levels of the production and dissemination of ideas,” for “effective public communication requires the speaker to make use of the services of others”).

By the way, the amendment has an exception for the press, which happens to be owned and operated by big, powerful, and oft times rich corporations.

Freedom of the press belongs to those who own them.

The Democracy for All amendment:

SECTION 1.  To advance democratic self-government and political equality for all, and to protect the integrity of government and the electoral process, Congress and the States may regulate and set limits on the raising and spending of money by candidates and others to influence elections.

SECTION 2.  Congress and the States shall have power to implement this article by appropriate legislation, and may distinguish between natural persons and corporations or other artificial entities created by law, including by prohibiting such entities from spending money to influence elections.

SECTION 3.  Nothing in this article shall be construed to grant Congress or the States the power to abridge the freedom of the press.